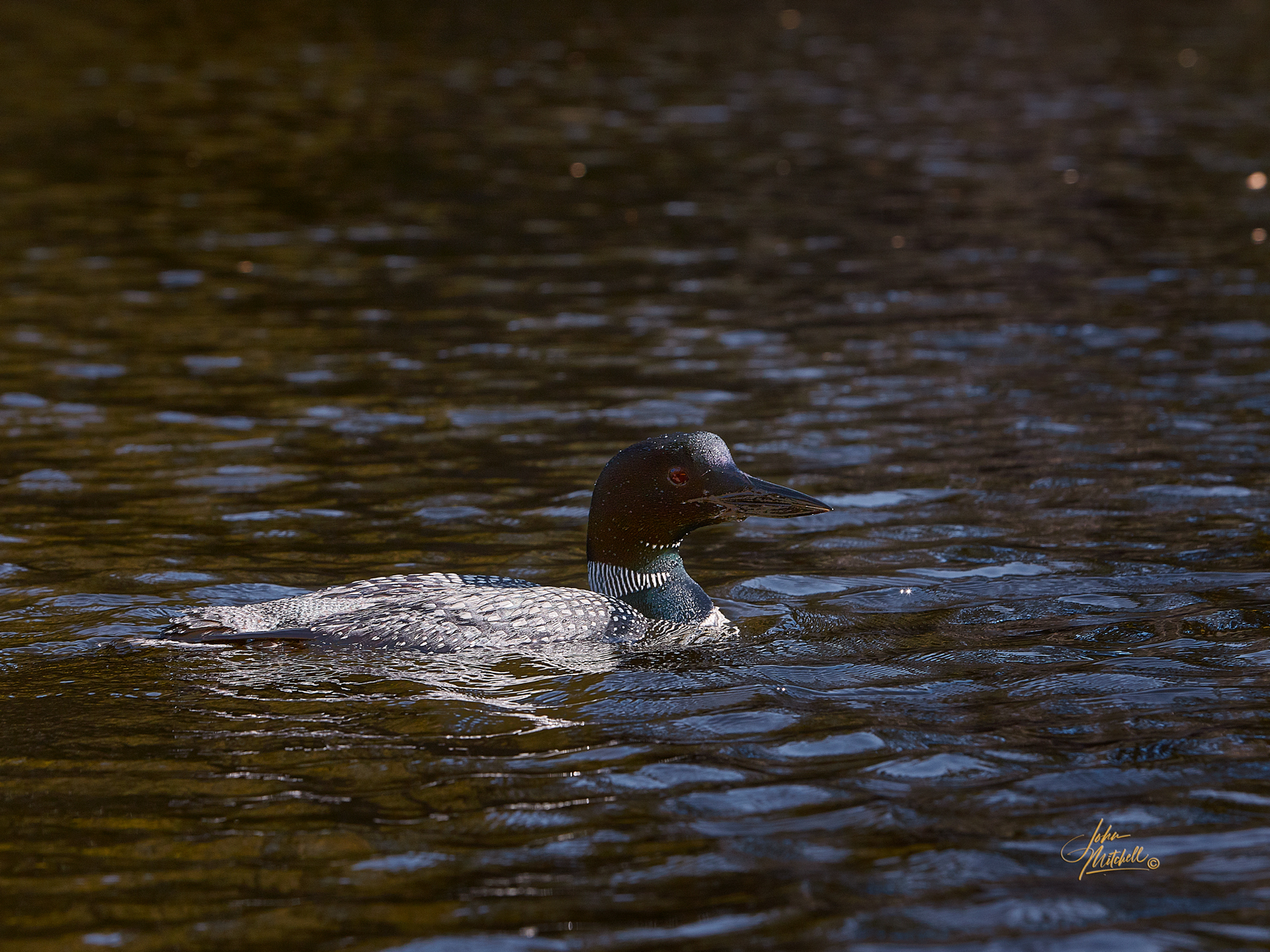 To me, the call of the loons tells me I’m in “God’s country”  Today that feeling would run through my veins.

I got up early, and with the kayak on the SUV, drove over to Canoe Lake. Three years ago (2019) Larry and I canoed the lake and part of Potters Creek. Today my goal is to get as far as possible up Potters Creek.

There was a mist over the water upon my arrival. By the time I launched the sun was starting to burn this off.

I set out heading north on the east side of Canoe Lake. About a mile into my trip I came across some driftwood and rocks that I wanted to photograph. The camera seized on me and would not fire. I tried everything I could think of to no avail.

I saw no point in continuing and turned around and paddled back to the launch point. Back on land I did a more thorough examination of the camera, located a loose connection, and tightened it. After severely scolding myself for not finding the problem sooner I re-launched and headed back up Canoe Lake.

When I got back to where I wanted to take pictures the light had changed enough I was no longer interested and moved on.

Soon enough I came across a log sticking out of the water. The challenge in taking photos from the kayak is the constantly changing angle of view as you are moved about by the current. By the time I got the camera out of the dry bag I have either drifted too close or too far away and I need to put the camera down and paddle back into position. 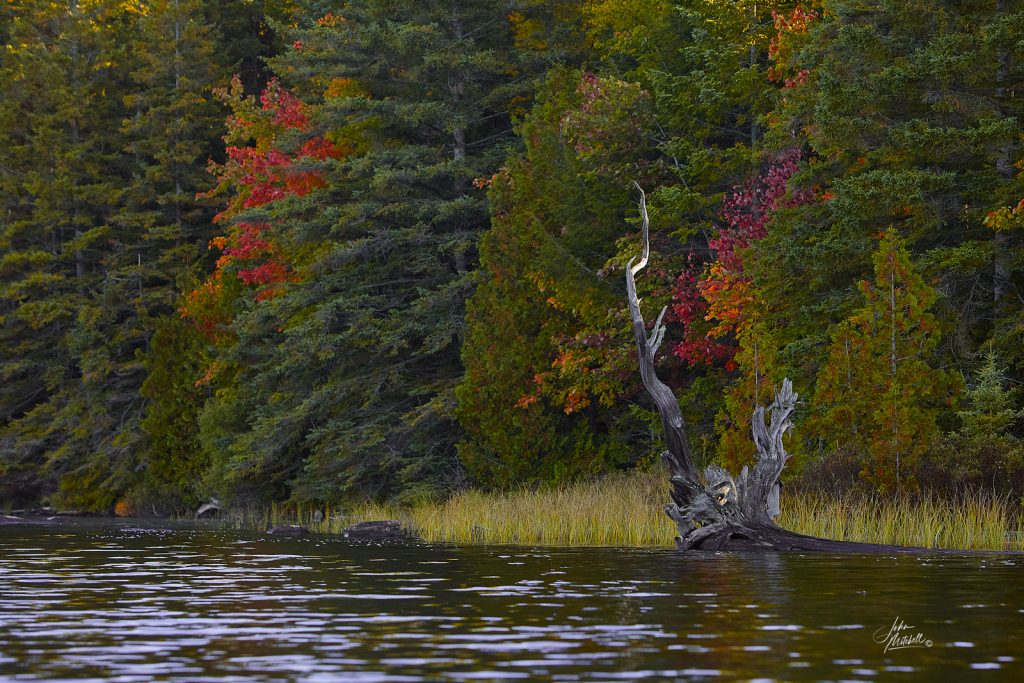 As I look back at the images from the time Larry took me to see the Tom Thomson memorial on Canoe Lake in 2016, it was this same log that caught my attention then. Previous blog post

Ahead of me was Cook Island. I took a photo here and failed at getting an image of a goose that was determined to torment me. 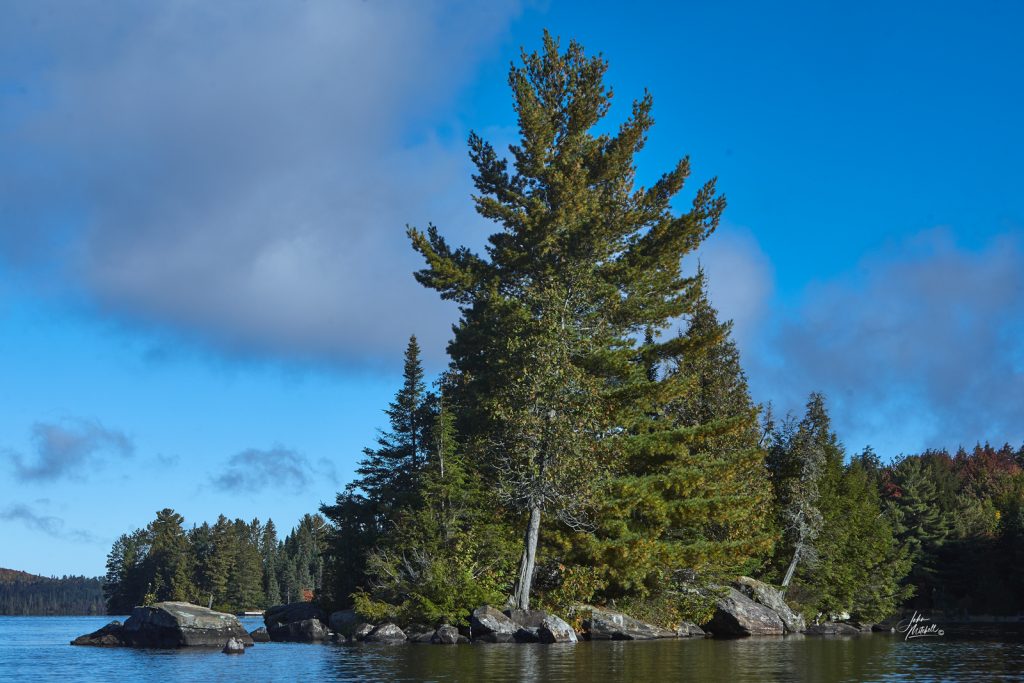 At this time I set out to cross Canoe Lake to the western shore where the remains of what was the village of Mowat still stands. Thomson spent much of his time in this area and it is near where his body was found floating in the lake. I have never actually seen it, but there is a small cemetery on the hill behind Mowat. I believe Thomson is still buried here.

One of the cottages on the shoreline is full of character and I needed to photograph it. 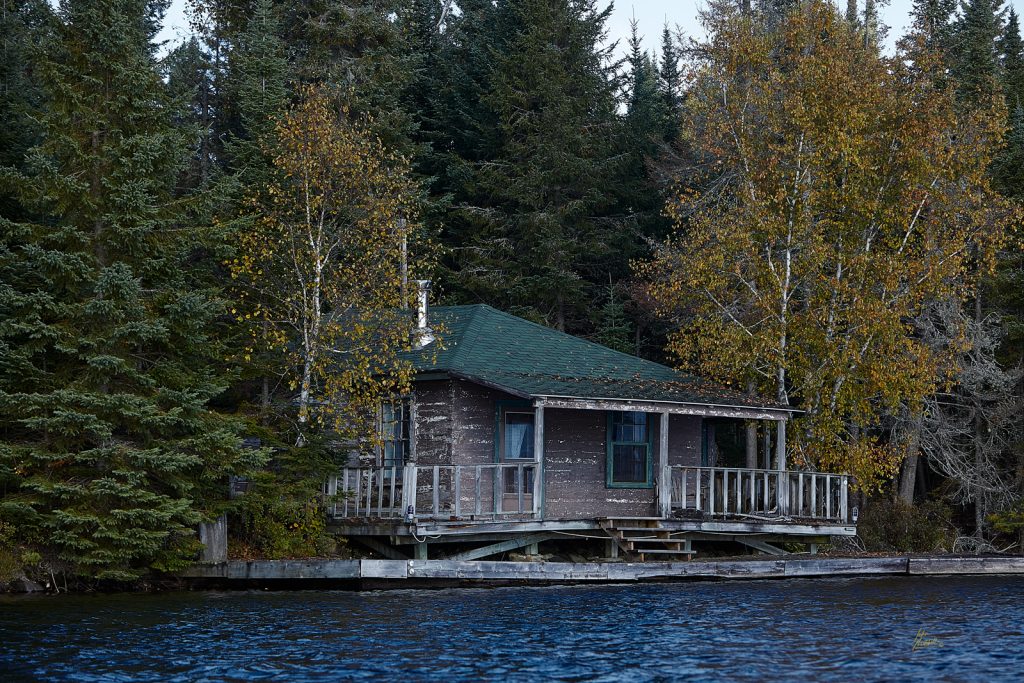 At this point, I had been in the kayak for a while and I desperately wanted to get out and stretch my legs. My nature is that I won’t land on what I know is private property without permission, so I wasn’t about to exit using one of the docks of the cottages.

I didn’t have any success locating another point where I could climb out to dry land. Remembering east of Potter Creek there is a portage point from Canoe Lake to Little Joe Lake I set out for there.

According to this map, this was one of Thomson’s favorite camping places. 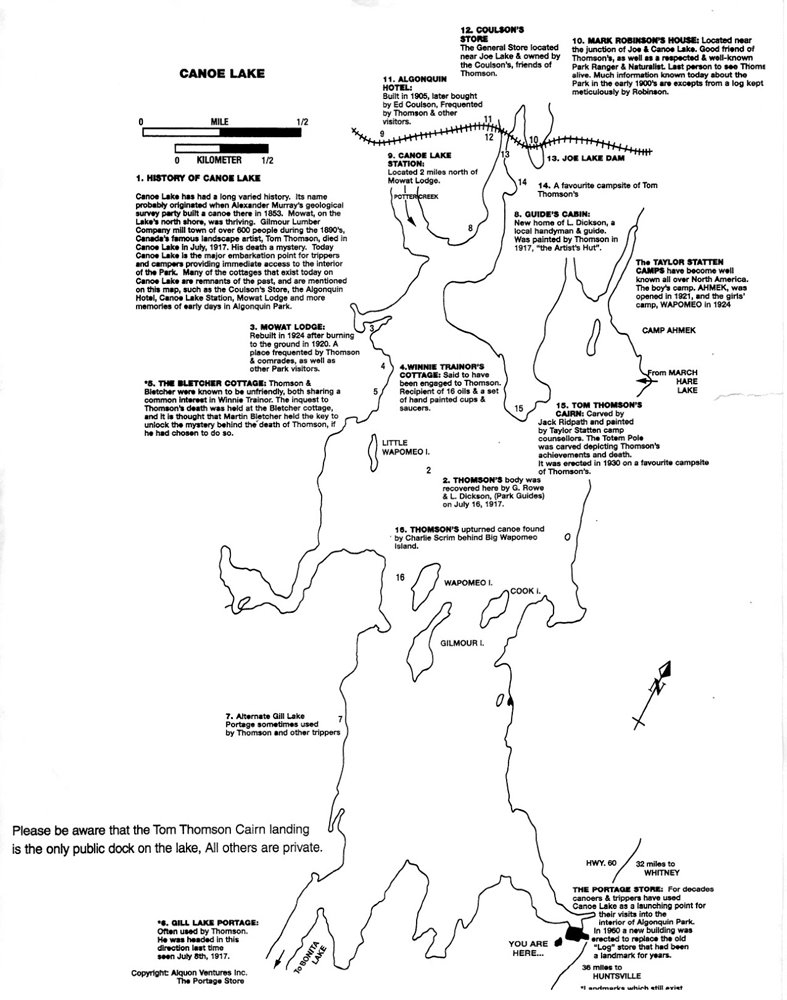 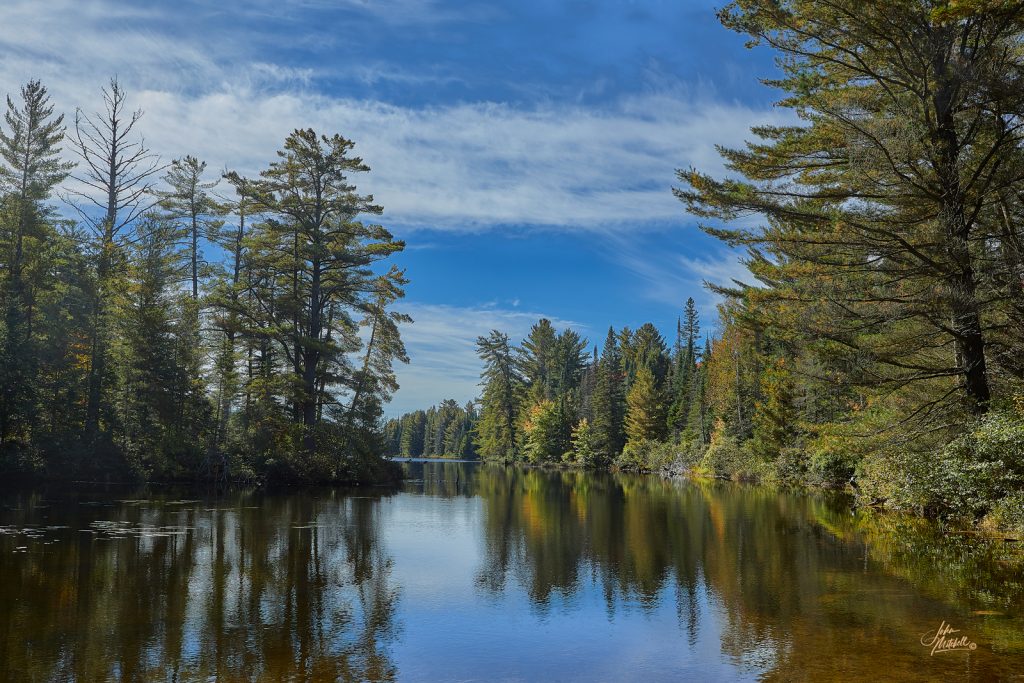 Rested and fed, it was time to get back on the water.

I started back down the bay heading to Potter Creek when I heard a loon. I love the sound of a loon’s call. Looking around I spotted an adult and what appeared to be full-size offspring. The offspring just didn’t have their colour yet. By the time I got my camera out they had disappeared under the water.

Realizing I would need the longer lens to photograph the loons I reached for the dry bag. By the time I changed lenses the loons and appeared and disappeared a couple times, but I was paying attention to the pattern of where they were going. 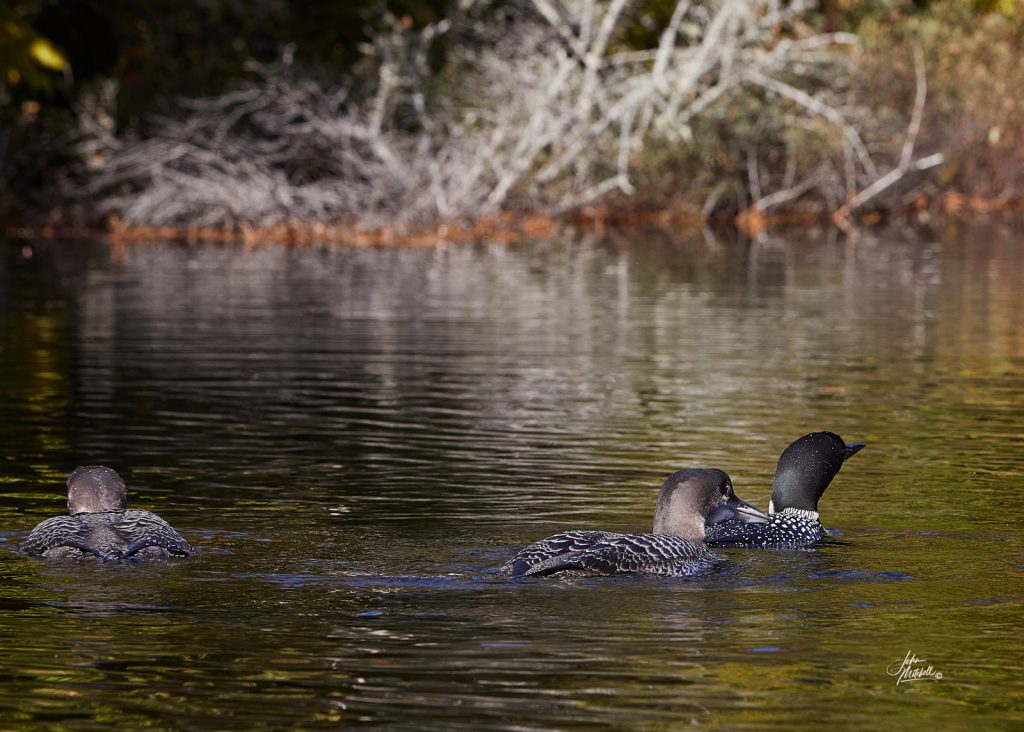 I spent at least the next 45 minutes playing hide and seek with these three birds. To this day I’m not sure who won, but it sure was fun and considering I got a couple decent shots of the loons I’d say I faired pretty well. 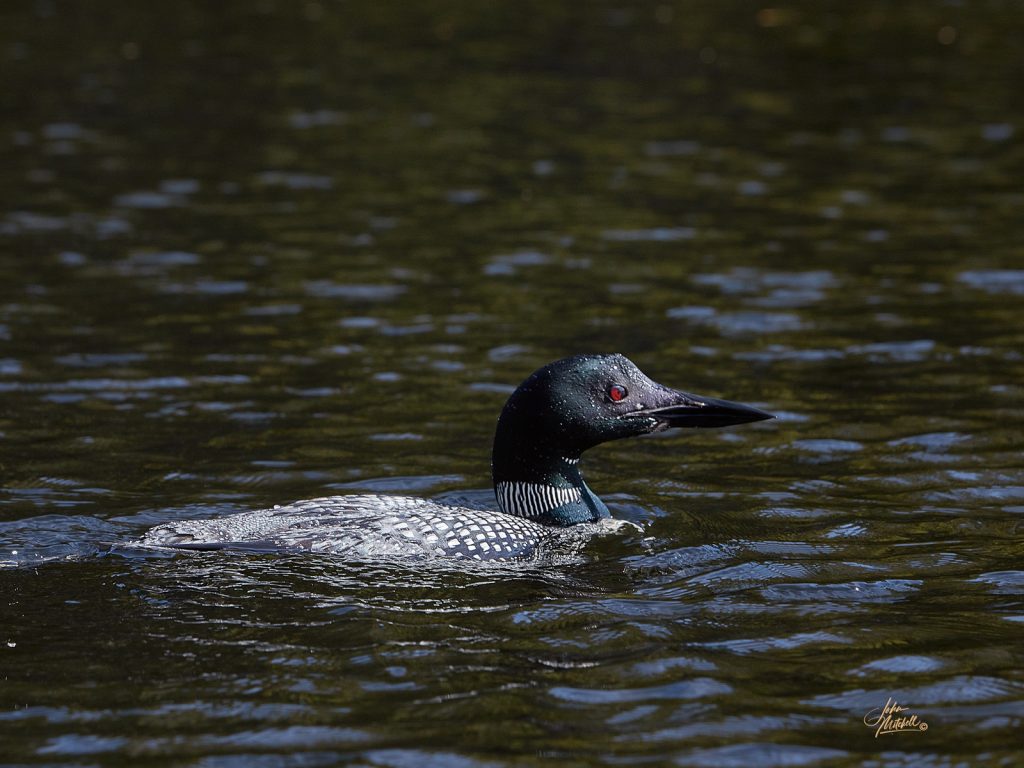 I continued my journey to Potters Creek and paddled upstream. The water level was considerably higher than when I was last here in 2019.  I reached the bridge where the train used to run. It made me think of Thomson arriving here, getting off the train and walking down to Mowat Lodge.  Continuing upstream, the further I went the narrower the creek became. The brush on either side continued to move in and soon it was so close getting my paddle in the water and making a stroke was not possible. Turning around and heading downstream I came upon a sign for portaging that I had missed while going upstream. I guess I had gone further than I was supposed to. 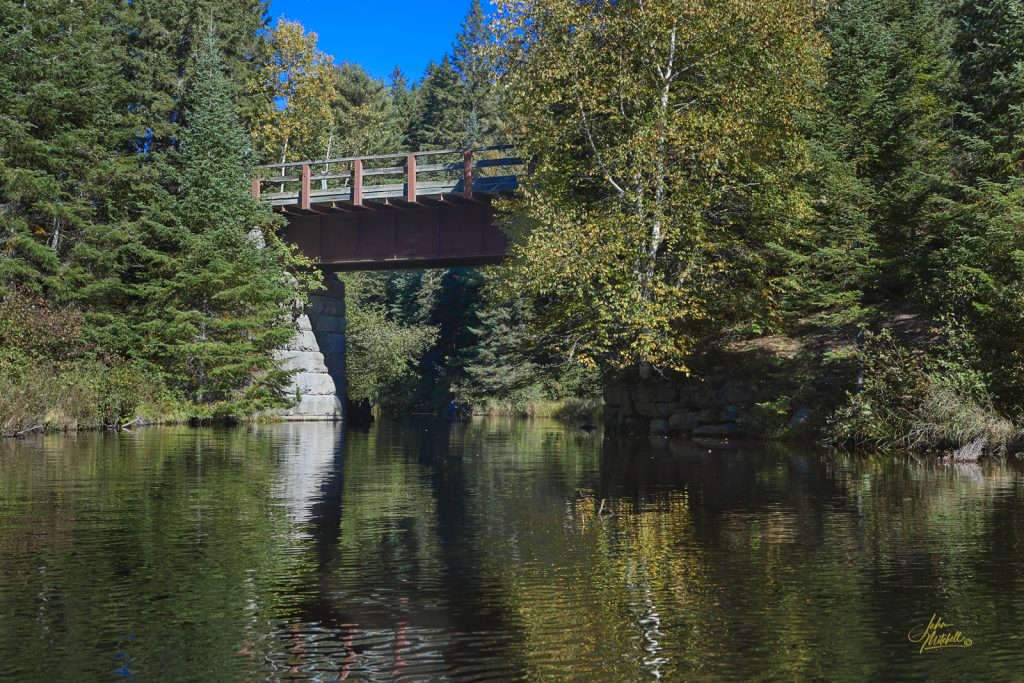 I took advantage of the current and enjoyed the scenery and even took a couple pictures. 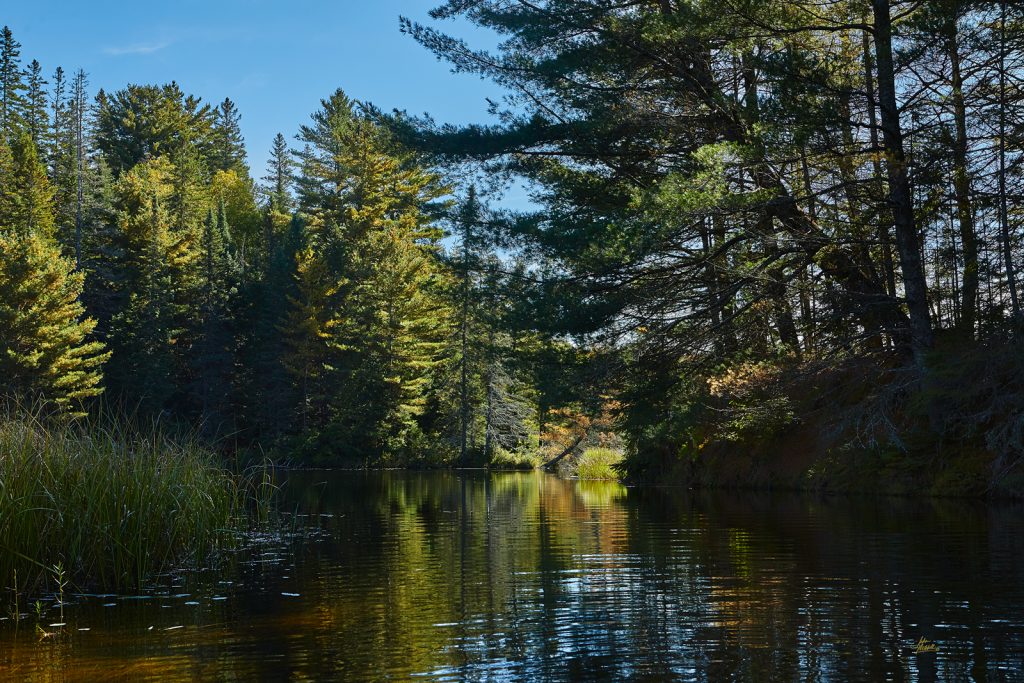 As I exited Potters Creek back into Canoe Lake I thought about going back to the portage point for another break. Second-guessing myself I decided that heading back to the launch point was the more expeditious thing to do. By the time I reached the south end of Canoe Lake I was wishing I had gone for the break.

My arms and legs both felt weak. Beaching the kayak I just sat there for probably a ½ hour, to tired and sore to climb out of the boat. When I felt I had the strength to get out I found both arms and legs felt like rubber. I found a bench and extended my rest before venturing to load my gear and the boat back aboard the SUV.

All in all this was a good day. There is a special feeling knowing you are in the same place where great artists have walked and roamed, and yes died. They worked here, painting the sites and today I observed those surroundings one hundred and four years later.

The feeling wasn’t going to go away because tomorrow I would discover where Thomson painted his famous “Jack Pine” and learn even more about his life.

An idea worth expanding.