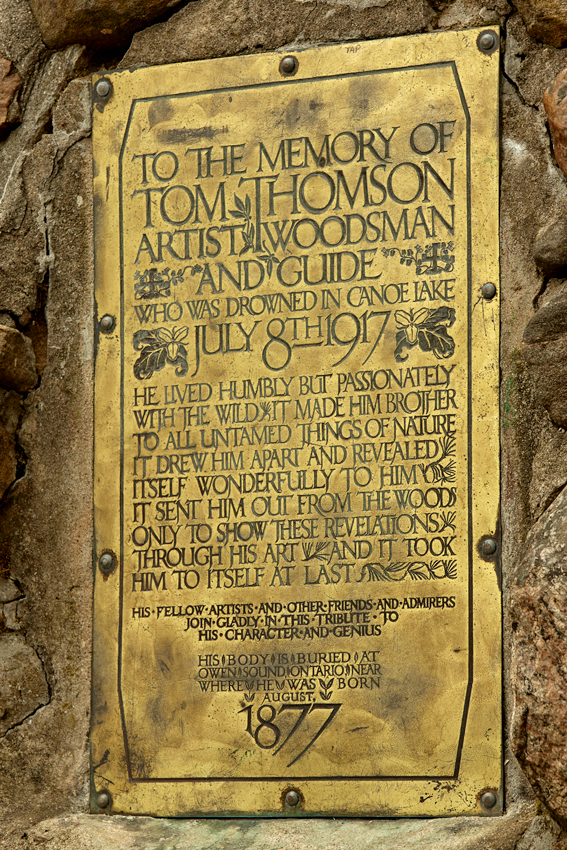 I first went to Algonquin Park at approximately 10 years of age. My aunt and uncle, who were my godparents, took me with them on their annual vacation to the Muskoka area. That year Algonquin Park was a one day side trip by car. I remember the narrow highway with its gravel shoulders where cars would pull off by the dozen at the sighting of a deer. With carrot in hand we disembarked with strict orders to move slowly or we would scare them off. I fed my first deer.

Today cars still pull off to the shoulders of highway 60 by the dozen. The shoulders are now paved and they stop at the sighting of moose, not deer.

At that first time I had not heard of the Group of Seven” or of Tom Thomson. But my interest in visual expression and art was already developing. I had my first camera, a Brownie Hawkeye and the only film was black and white.

That was some 55 years ago.

Today my love for the north that was developed in those early years still exists. This year I ventured back to Algonquin Park for two 4-5 day trips. I still love the strength of a good visual statement. The camera is now digital, but some of the images still end up black and white. 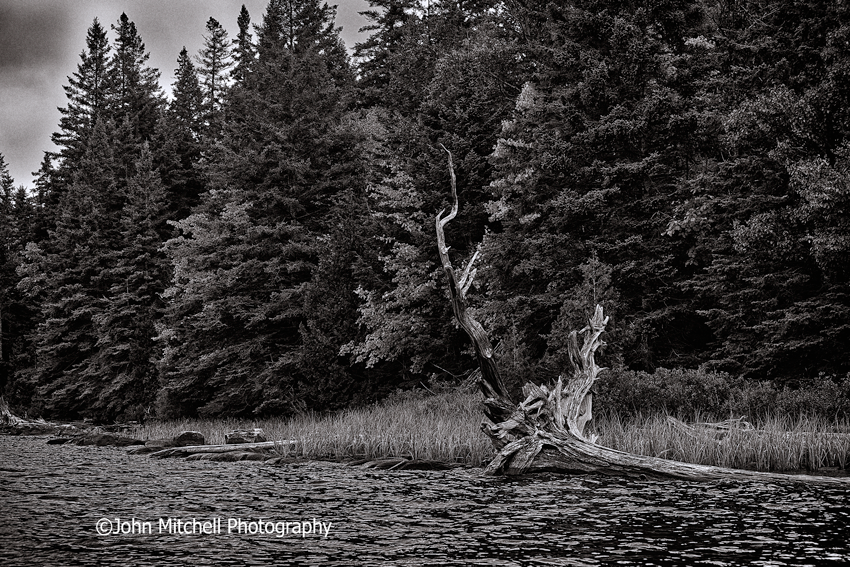 I now know of the Group of Seven and that Thomson was not a member of the group as many think. I admire their work and visit the McMichael Canadian Art Collection 3-5 times a year for inspiration and reflection.

In an earlier post I wrote how important the “artist’s eye” is and how looking at reference photographs created by members of the group of seven clearly showed the importance of having the “artist’s eye.”  You could see the influence of their art even in the creation of a simple photograph that they would later use as reference in one of their paintings.

My last trip to Algonquin was with my brother Larry. We only took the canoe out once on this trip,  paddling Canoe Lake. Larry is much more familiar with Algonquin Park and introduced me to some sights and history of the area.  Canoe Lake and Tom Thomson was one of those.

We left from the southern tip of Canoe Lake and paddled north. As we entered the main part of the lake the water quickly became choppy. I didn’t know there were so many cottages and cabins in the park. The shore line of Canoe Lake is lined with cottages barely visible through the bush. 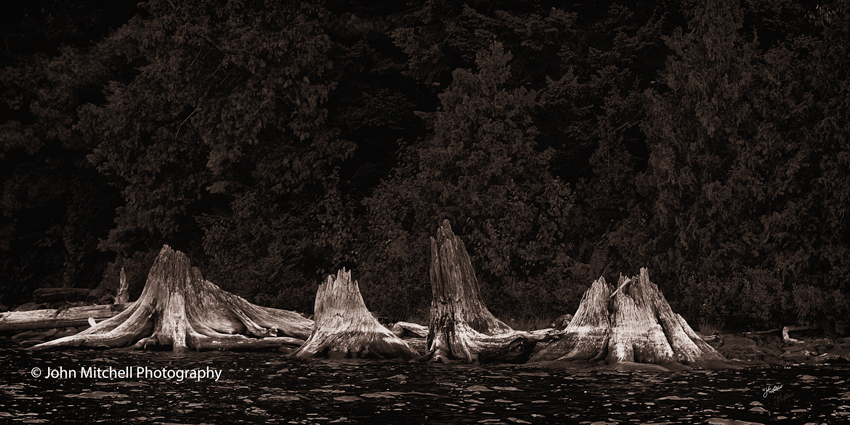 We paddled past the east side of Cook Island and the remains of a summer camp with cabins that no longer had roofs, but still had a “KEEP OUT” sign posted on the point of the island. Another camp is on neighbouring Wapomeo Island. Larry told me at one time one was a boy’s camp and the other a girl’s camp. I can imagine the fun times which would have been a part of summer camp here.

Continuing north Larry pointed out a spot on the shore dead ahead, saying that’s where we are headed. Our course was interrupted by the calling of a couple of Loons off our port side. I learned how difficult it is to get a clear photograph of a bird that can disappear under the water while you’re bobbing around in a canoe on choppy water. This was the best I got. 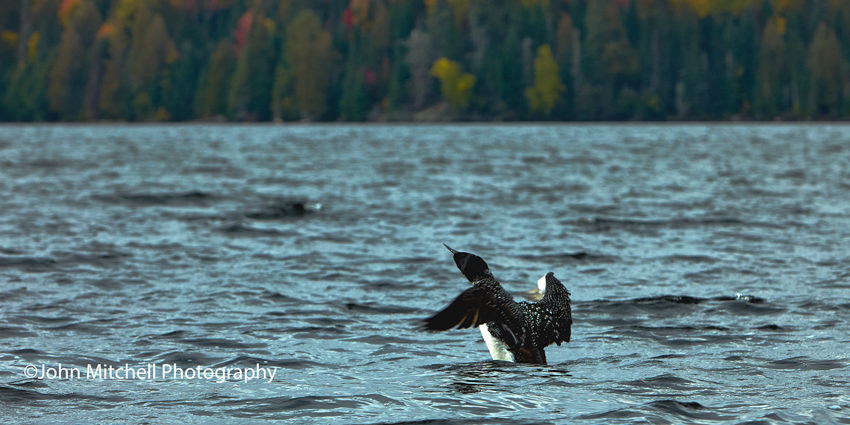 We continued to our target. There is a public dock here but we beached the canoe and tied it off. (Hate to return and find it floating off in the currents.)

It’s a bit of a hike for old knees but we climbed the rocks (some having steps) to the top of the outlook and here is the Tom Thomson Memorial. Assembled by friends, it is said this was a favourite place of Thomson’s on Canoe Lake. The cairn is a beautiful and peaceful tribute to the life of one of Canada’s greatest artists. The totem pole is made with representation of the things that were important to Tom Thomson.

As we left the winds increased and we decided it was best to make our way back to the Portage Store and access point.

Since visiting the Thomson memorial I became curious about the death of this great painter on the lake that he loved. The deeper I delve into it the deeper the mystery becomes. It truly is a Canadian Mystery.

One writing talks about Thomson’s life in and around Algonquin Park. It states that Thomson was too busy with his quest as an artist to be interested in girls. It goes on to talk about Hugh Trainer, a walking foreman of the Huntsville Lumber Company, who had two daughters. The oldest was a comely girl by the name of Winnifred, who was known to keep the company of Tom Thomson. Some believe that Winnie Trainer and Tom Thomson were engaged and there are rumours of an unexpected pregnancy.

In July of 1917 Tom’s canoe was found floating north of Wapomeo Island. It was still upright and contained his lunch, supplies and cooking utensils. Ten days later Dr. Howland of Toronto was staying on Little Wapomeo Island spotted something in the water. It was retrieved by George Rowe and Larry Dickson who were going by, and turned out to be the body of Tom Thomson. Thomson’s copper fishing line had broken but was wrapped around his ankles.

An inquest was held at the cottage of Martin Bletcher and ruled the death accidental by drowning. Thomson was buried in the Mowat cemetery, but apparently at the request of the family the body was exhumed and reburied in a steel casket in Leith Ontario.

Other reports say “The coroner, who arrived after the burial, held a quick inquest without ever seeing the body and concluded the death was by drowning.”

The death of Tom Thomson certainly became more of a mystery in 1956 when 4 men, who admitted to having had a few drinks went exploring with shovels in hand and dug up a skeleton with a hole in the left temple at the Canoe Lake cemetery where it is alleged the body of Thomson was first buried. Although the media jumped to the conclusion that it had to be Tom Thomson the Ontario government produced a forensic analysis that claimed the skeleton was of a young aboriginal man. The government’s experts explained the hole in the temple as a trephination (a rare medical procedure to relieve pressure on the brain).

The first medical person to examine that skull was Dr. Harry Ebbs of Taylor Statten Camps on Canoe Lake. He was certain it was the head of Thomson and the hole was the result of a rifle shot. He left behind an interview that he asked not be disclosed until after his death.

Ebbs spent much of the rest of his life trying to prove Tom Thomson had been murdered. He kept a photograph of the skull that was recovered from the grave site. The article published in the Globe and Mail October 1, 2010 and updated August 23, 2012 reads:

He kept a special photograph of the skull unearthed that day in 1956, a photograph never before published.

That photo became pivotal this past year when Ottawa dentist Bob Crook and orthodontist Jim Hickman began a fresh examination of the 1956 evidence. Their amateur findings were then pursued further by forensic experts in Toronto.

Ron Williamson, a professor at the University of Toronto led that investigation and concluded ‘The contention that the 1956 remains belonged to an aboriginal man was based on the fact that ‘shovel-shaped incisors’ were found in the skull…now considered outdated…now been found in northern England and Scotland’

The Globe and Mail article goes on to say:

Dr. Williamson then turned to forensic artist Victoria Lywood of John Abbott College in Montreal. Ms. Lywood spent months building a “face” on the skull, unaware that there might be any connection to the late painter.

When the slide came up, it held a perfect Tom Thomson.

July 2017 will mark the 100th anniversary of the death. Was it an accidental drowning or a murder? How did he fall out of the canoe without dumping it? Will the truth ever be known?

One thing we do know is Tom Thomson was one of the greatest painters this country has ever had. He was dedicated to his art, and was known to be generous and often giving his paintings to friends. Those same paintings now sell for millions of dollars.

As for me, I’ll continue to admire and learn from the legacy that he left us and I will look forward to more trips to Algonquin Park in 2017.

A November 11, 2010 article in the Star gives suggestion to Winnifred Tannor going to Philidelphia where she had the child and put it up for adoption.