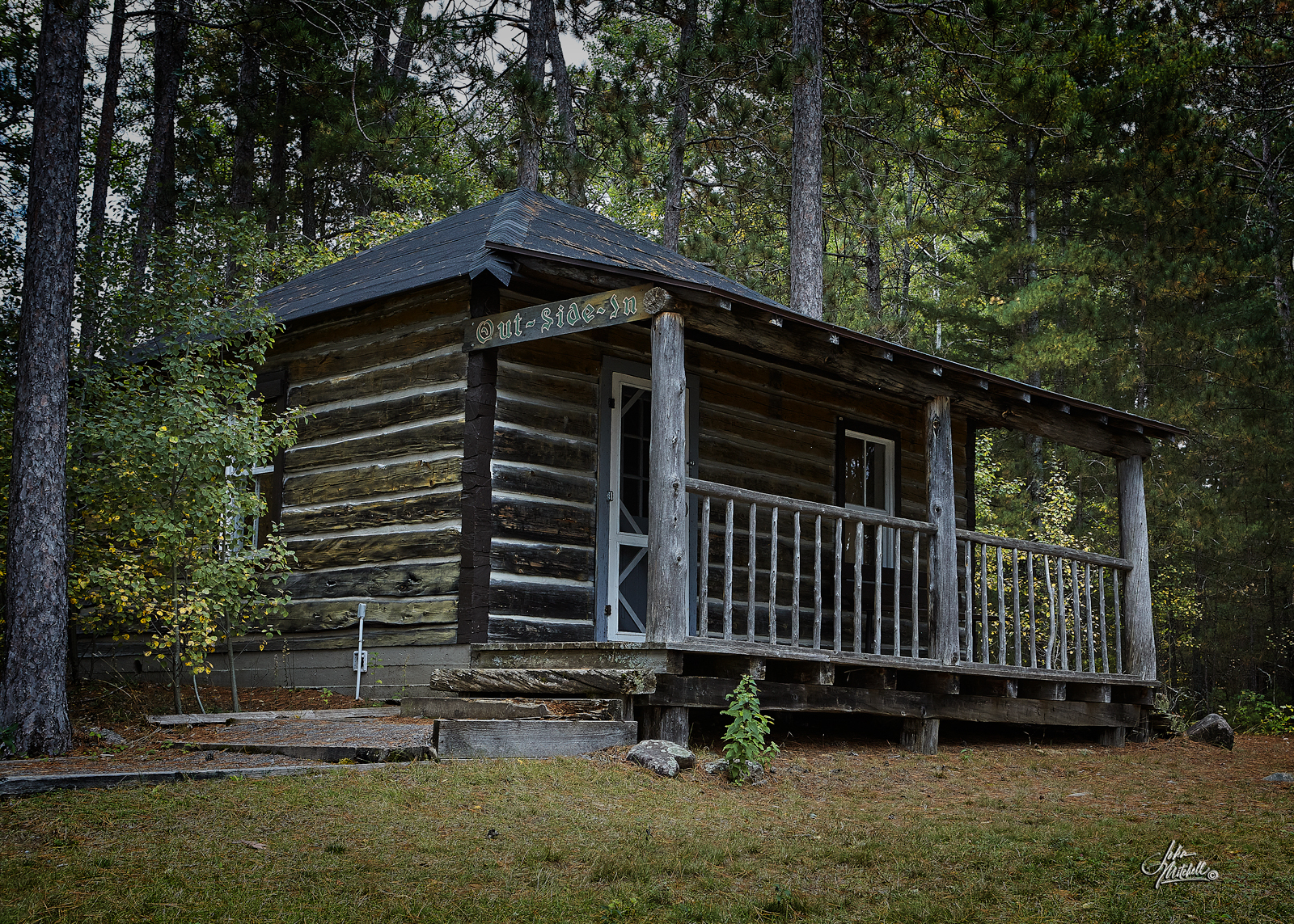 Thomson stayed in this very cabin in 1916 while he was employed as a fire ranger. The sign hanging on the cabin is a replica of the sign painted by Thomson that summer and thus the name "Out Side In"

Today Larry will introduce me to Achray. It’s day nine and we’re having a field trip.

We’re headed for the very east end of the park, Achray. Larry’s driving. He’s been there before. I never have. It will take at least a couple of hours to get there.

We head east on Highway 60, passing by the east gate and continuing out of the park. I have never been here and it’s all-new. Lots of hills at first, just like in the park. But then the hills stop and everything is getting flatter. There are a lot of lakes and rivers and sawmills, and we keep driving. Eventually, we turn north. There are a lot of cottages and a big lake called “Round Lake.”

I saw a sign that said Algonquin Park was off to the left, but we drove by. In a few short minutes, we were on the outskirts of Petawawa where we found a Subway and grabbed a sandwich to take with us for our lunch. Backtracking we found the sign saying Algonquin. It’s now on our right.

We pass an Algonquin Outfitters store and keep going. The pavement ends and the dirt road continues with us on it. There’s evidence of it being a logging road and I am having visions of us going over the brim of a hill only to find a fully loaded log hauler high tailing it down the middle of the road.

The scenery is beautiful as we pass a few ponds and marshes. There are signs to a lake and another to a waterfall, but we drive on. One pond | marsh, in particular, caught my attention and I mentioned to Larry that I would like to stop there on the way back if we remember where it is. He took note of the next mile marker on the dirt road. Yes, there are mileage markers on the dirt road.

Then there’s the sign “Baron Canyon Trail.” There are only 3 or 4 other vehicles in the parking lot. Parked we disembark and I retrieve my full backpack of camera gear from the back of Larry’s vehicle.

We set off on the trail, but only get about 50 feet in until it begins to ascend. It’s uphill for as far as I can see. I pick a spot and trudge on. That’s my first goal. Reaching it I rest. We’re like a couple of old men. Wait. I’m 70, not 17. What am I doing here? I pick another target and move on. And so it goes, picking smaller, not so far targets I tackle the Baron Canyon Trail.

Reaching the top I’m not sure if the view is amazing or scarier than hell. One wrong step and it’s a drop of 350 feet. Remembering my miss-step back at Oxtongue Rapids, I’m staying well back from the edge. The view and the rock formations are impressive. Eventually, I nudge my way closer to the edge and look down at the Baron River. In the distance, I could see something move and watched as it got close enough to identify and canoeist paddling through the canyon.

The gallery below includes half a dozen images I took on the trail. (click on the images for a larger view) 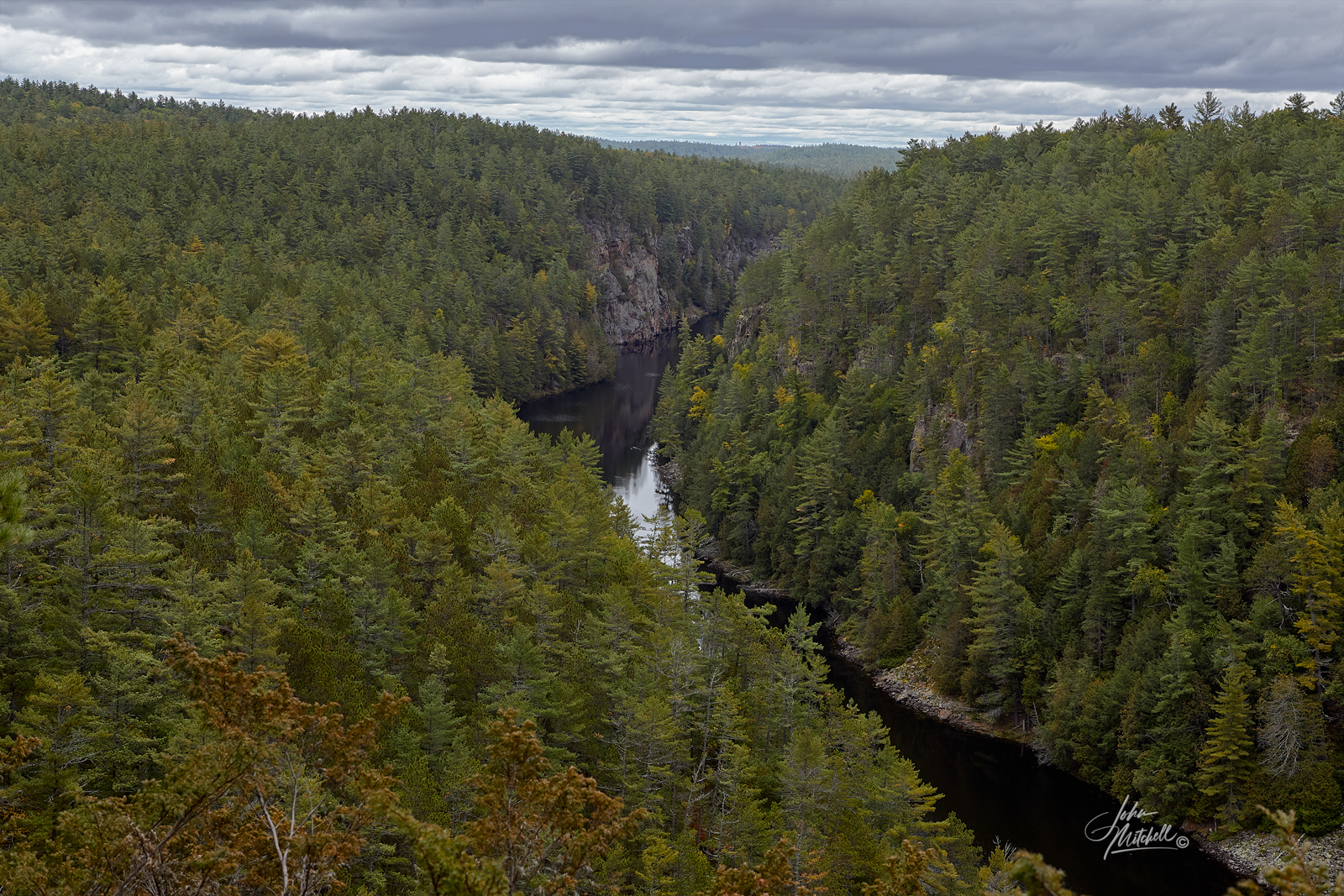 Looking downstream with the river below.


Back to the vehicle, we continued the trek deeper into the park until we came to a sign directing us to Achray.  Parked, we grabbed the Subway sandwiches from the cooler and a couple drinks. A picnic table awaited us.

As we ate, over my shoulder a log cabin structure kept grabbing my attention.

The Out Side In

After eating I made my way to the front side of the cabin where I was greeted by the sign “Out Side In”. Photographs were necessary and I’ll let the description under the following images fill you in on the significance of this structure, particularly to me. 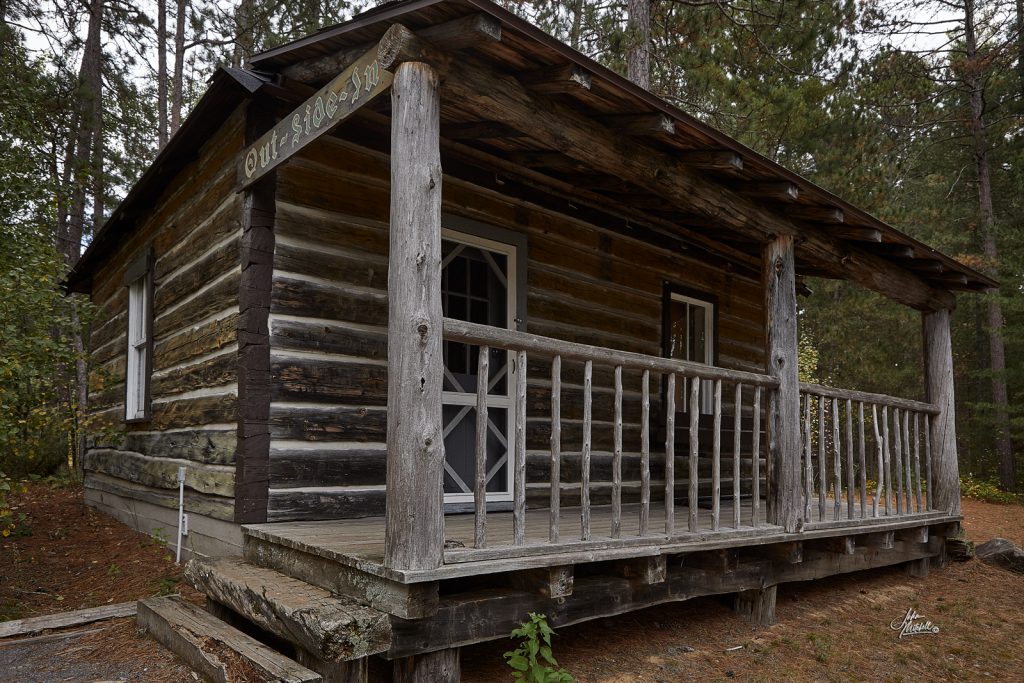 Finished I wandered down to the lake and then back to the picnic table where Larry was waiting. He asked me if I felt like taking a walk down “Jack Pine Trail”? Honestly, I had completely forgotten the significance of this trail and responded hesitantly by asking how far it was.  It turned out to be an easy walk on a groomed trail, a little further than we anticipated. What was at the end of the trail would have made a walk three times longer worth every step.

The text under the gallery images will fill you in on the pure delight I felt at the end of this walk. (click on the image for a larger view, and click on the “i” for the text)

As I stood looking across Grand Lake and comparing it to the background in “Jack Pine” nothing lined up for me. I could see a few of the hills but then the rest just weren’t where they appeared to me. I took a couple steps forward and could see a wider view and everything fell into place.

On the plaque is a picture of Thomson’s rediscovered tree in the “70’s” If that is Thomson’s tree in the ’70s is this log his tree today? I wonder. 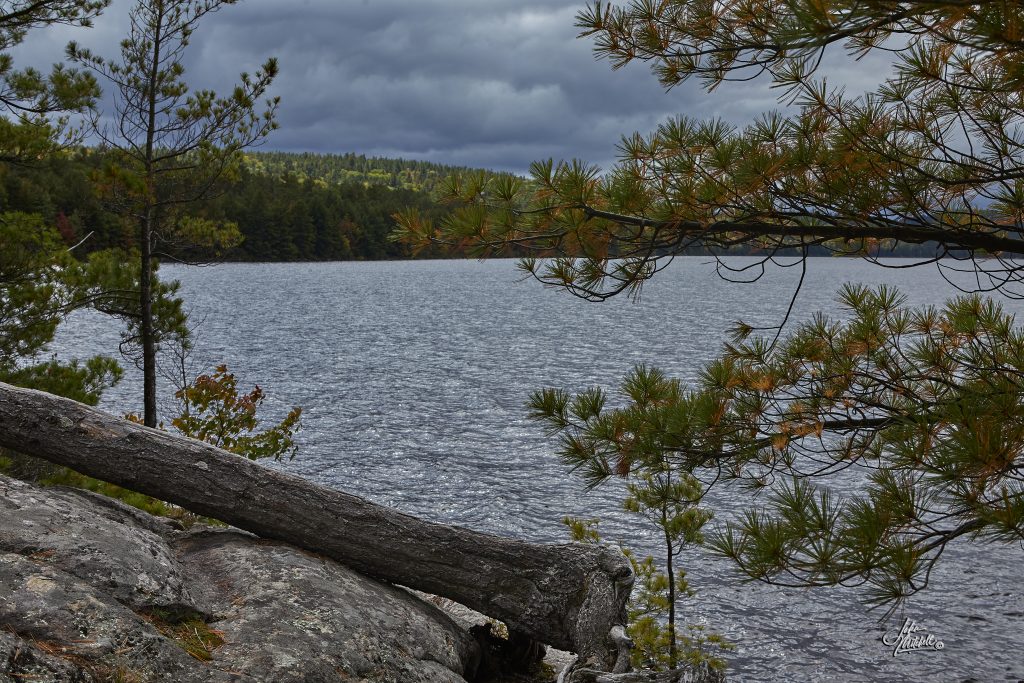 It was time to head back to our campsite at Lake of Two Rivers. As we neared the mileage marker for the pond | marsh I saw we began looking at everybody of water; is that it? Finally, we came across it and stopped. I got out and had a look. Being an old-fashioned film photographer I plan my shot before I ever take it. I found the angle I wanted and figured I would need about a 35 mm focal length.  With that information, I went back to the SUV and grabbed the camera body and 24-70mm lens, and returned to the spot that I had picked to shoot from. Looking through the lens I decided to go with a focal length of 24 mm, leaving me room to crop in post-processing if I so desired. My intention was to get it in one shot, versus layering images with various exposures together. I had to keep the highlights where I wanted on the curve and also maintain at least minimum detail in the shadow areas.

When I first opened the RAW file from the camera I thought I had failed. I had the shadow detail I needed but the highlights were too light. After working on the file for just a few minutes, what I thought was a failure had become one of my favourite images from the entire trip.  What I love is the muted tones combined with the saturated colours of fall. 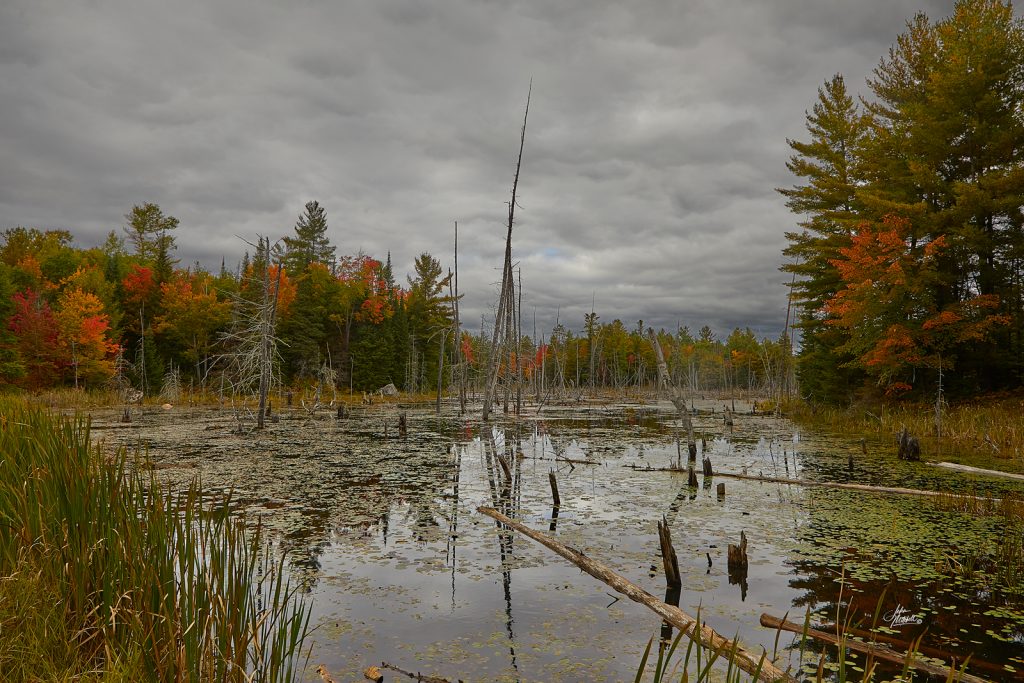 Tell me what you think.

Only two more days left in my 2021 fall adventure to Algonquin Park and I will combine them in my next blog post about “places I love.”