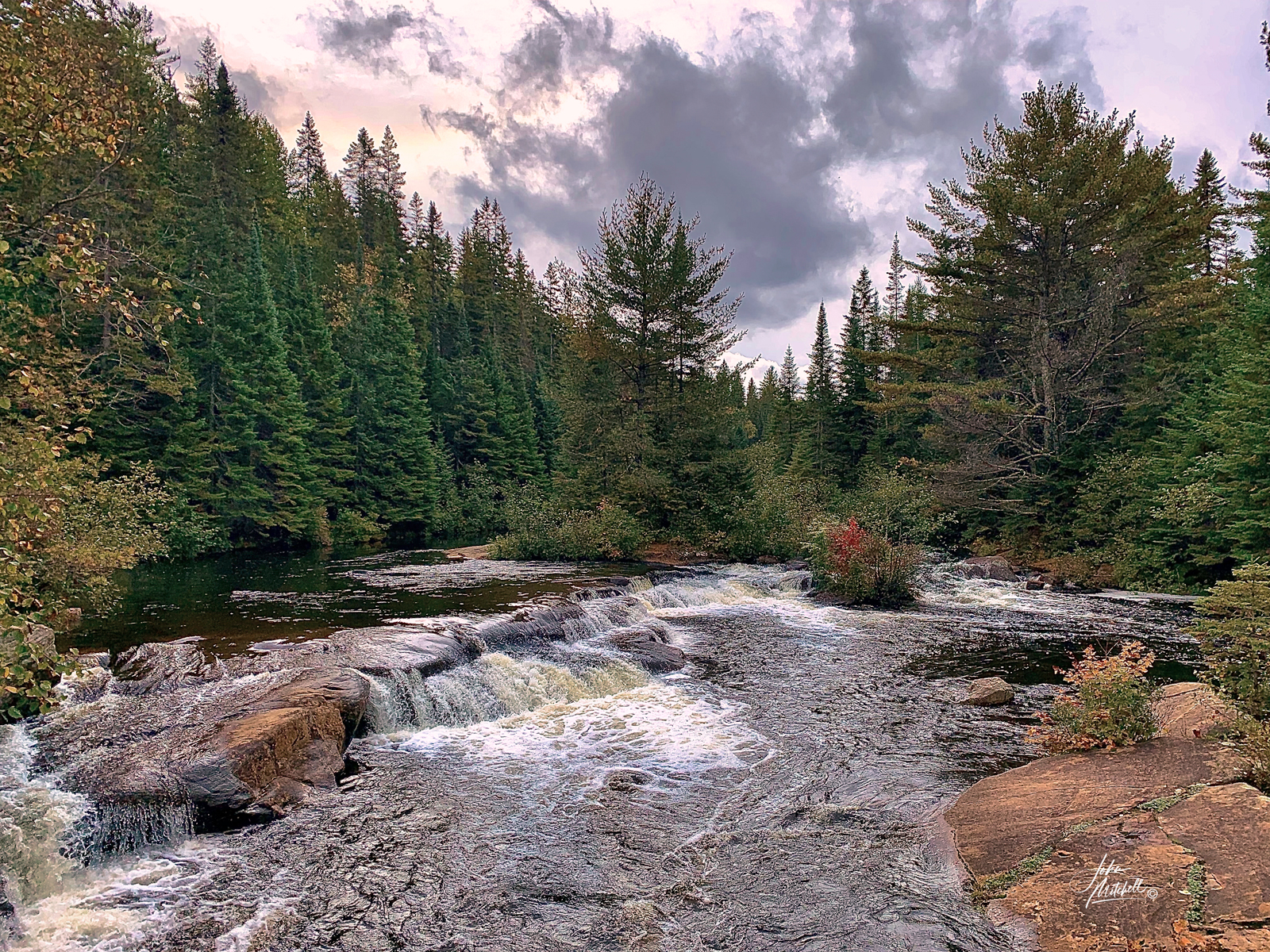 I didn’t realize it at the time, but yesterday’s adventure was on part of the North Madawaska River.

Looking at the map, a little further south on the lake is another larger tributary of this river. Day 5 found me exploring this waterway.

The sun was out and it was a gorgeous day. Larry had decided he was going to take another walk on the Spruce Bog Trail. I would have time to launch the kayak and do a little exploring.

I headed south across the western end of Lake of Two Rivers and soon enough found where the other tributary of the North Madawaska River emptied into the lake.

Heading upstream every twist and turn of the river presents another amazing view. A couple times, I stop paddling long enough to take a picture. I soon realize if I keep this up I won’t be going very far. 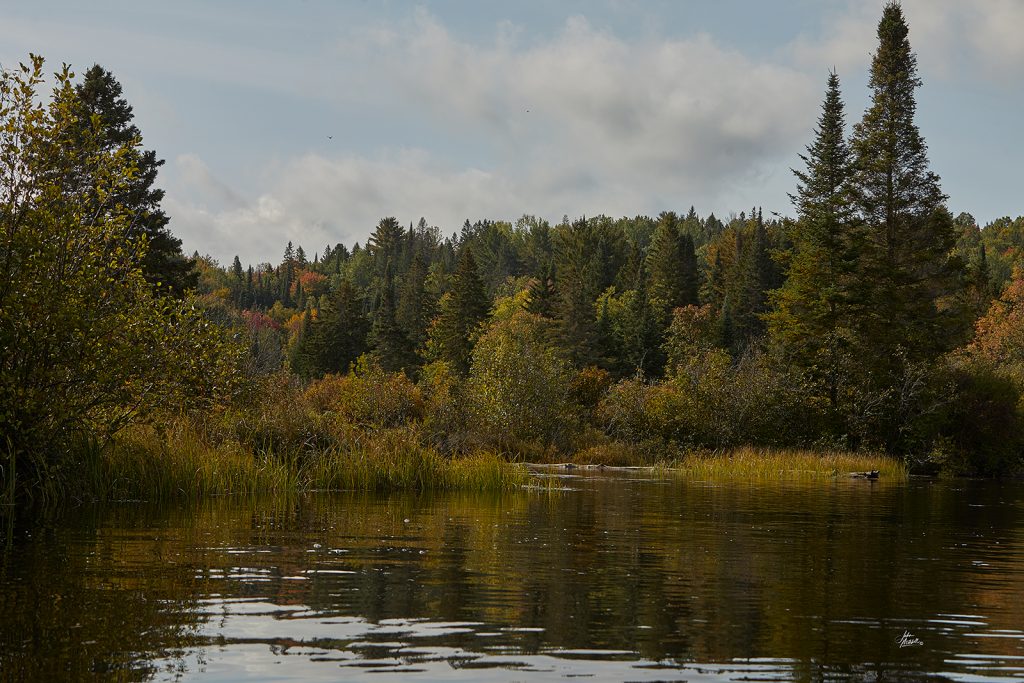 I start taking note of the sites I want to photograph on the way back downstream. The problem with doing that, it might look completely different coming from the other direction and I might miss it. The other thing is, the lighting is likely to be completely different later and may not be nearly as impressive. However, in the interest of making progress, this is what I decide to do.

Going around another bend I come across a canoe with a young couple. The kayak moves quicker than the canoe and I pass them. However, just a little further upstream I slow down to take in the scenery and they pass me. We continued this little game of tag as we both progressed upstream.

While I was preparing to launch my kayak earlier there was another couple set out in their kayaks. Now, as I enter a wider section of the river I see them approaching me, coming downstream. As we pass I called out asking how far they had gone and they replied they had turned around at the waterfall.

I wasn’t aware there was a waterfall or how much farther upstream it might be.

It was about a half-hour later that I could hear the faint sounds of rushing water. Maneuvering more twists and turns in the river I notice a significant increase in the current. I make another turn to the right and in front of me is a bridge and just beyond the bridge is a small two-foot waterfall. 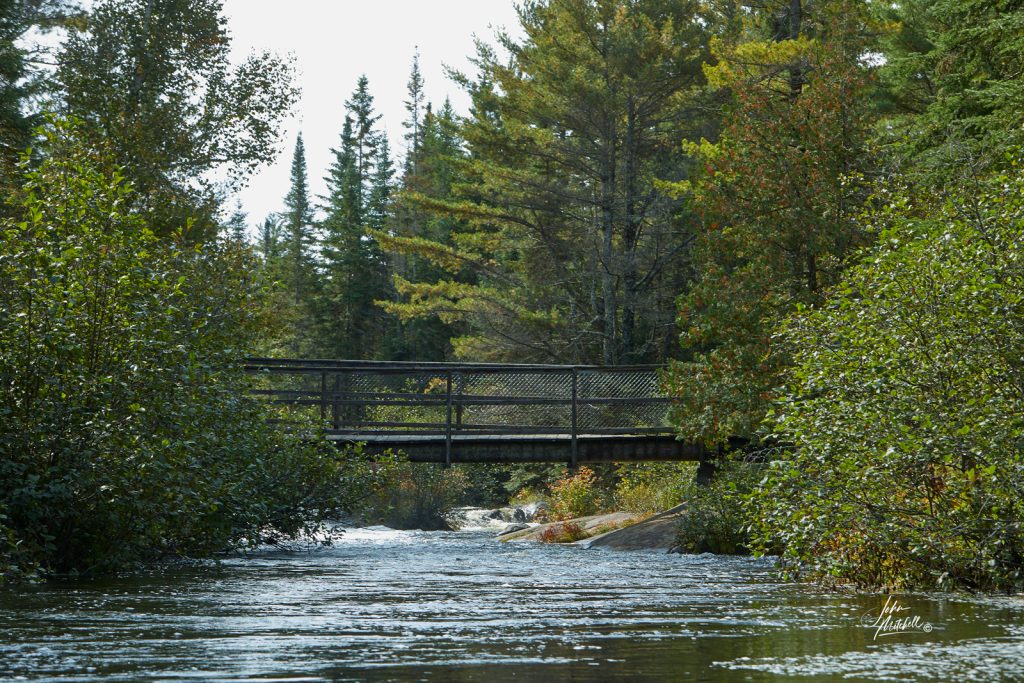 On the left shore was an opening and a glove cut in the shore where canoes and kayaks had landed. I paddled hard getting the bow of the boat up on shore as far as I could. Yet, I still couldn’t climb out on dry land and the shoreline seemed to drop off rather quickly. I was concerned about stepping onto the wet rocks under the water for fear they would be slippery, sending me for a cool and unwanted dip.

I shoved off and made another attempt to get further ashore but I was making no progress.

The couple in the canoe arrived and offered to land first and then give me a hand to get ashore. I graciously accepted their offer, backing away from the shoreline, making room for them to land.

Once they had their canoe safely ashore I paddled hard and they assisted me to get on dry land. I decided this was as far as I was going today, but I would take a break here.

I got my camera out to take a few pictures. 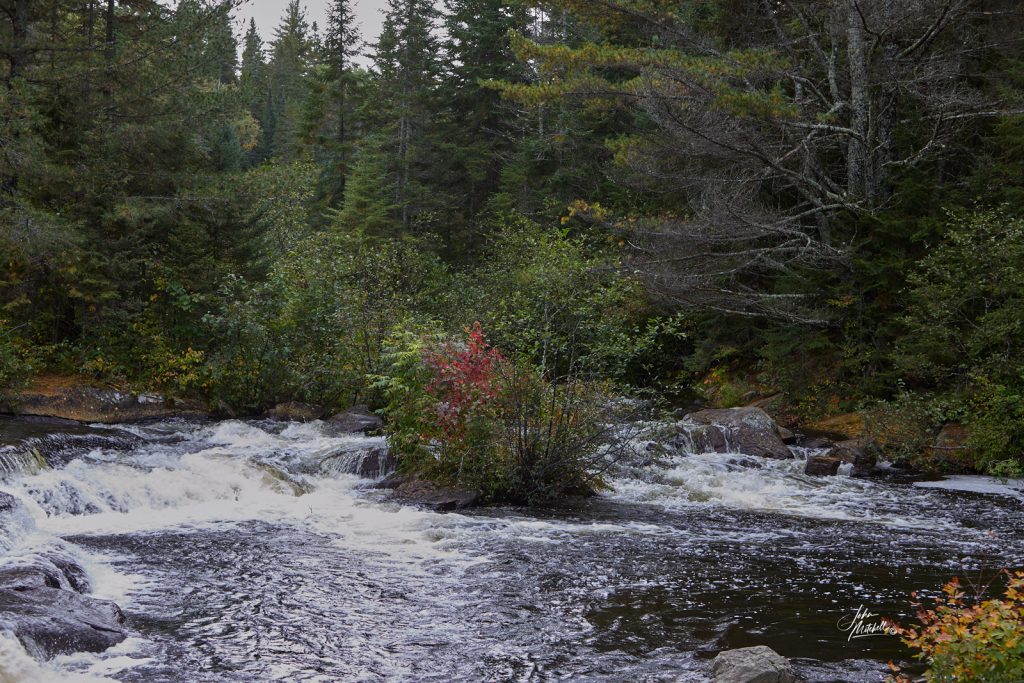 The couple who assisted me asked if I would take a picture of them with their camera. I obliged and also took one with my camera.

I took some photographs of the area and wandered out onto the bridge. A few people had started the tradition of putting padlocks on the bridge. 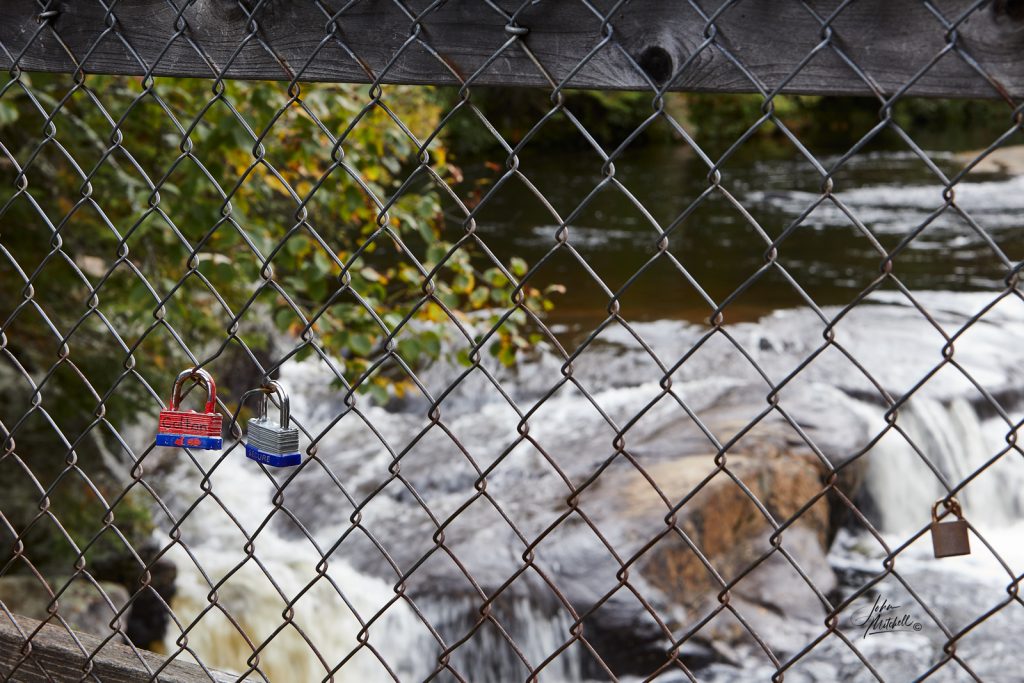 After a snack and loading all the gear back into the kayak I tied a rope to the stern, slid the kayak down the embankment and into the water.

Returning downstream was much like the previous day with the current carrying me along. I had more time for photography, although on a few occasions I had to paddle back upstream or find a little spot out of the current where I could sit quietly, take in the scenery and take a few more pictures.

Returning to the launch point on Lake of Two Rivers I took a much-needed rest before loading the gear and kayak back aboard the Forrester.

It was another great day in Algonquin.

And on the 6th day

On day six we had a few things we needed to pick up so we were off to Huntsville. It’s a 75-kilometer drive from Lake of Two Rivers into Huntsville, which is about the same distance from Cambridge to Mississauga. That’s about the only similarity. It doesn’t matter how many times you drive Hwy 60, every hill, bend, curve, bring more beauty, and the time passes quickly.

In Huntsville, I wanted a brush and a bucket for cleaning off my kayak. Larry needed gas and we both bought more firewood at the Petro Canada station to take back to the campsite. A pitstop at Wendy’s for chili solved the “what’s for lunch” issue.

On the way back to camp Larry suggested stopping at Oxtongue Rapids again. With all the rain we had the water should be pretty wild. That was an understatement. I wouldn’t have wanted to even take a white water kayak through those rapids.

Larry set out to take some photographs. I decided to try my hand at making some videos with my i-phone.

There were so many obstructions in my view, but I eyed a tree where the trunk grew out from the roots in the bank and overhung the edge of the fast-moving water. Standing on the base of that trunk would give me a better view. I took a big step forward planting one foot on the trunk of the tree, but my forward motion was too much and my body continued past the tree. I wrapped both arms around the tree trunk and hung on for dear life. Hanging over the water I tried and tried to swing my body back to the safe side of the tree trunk. I finally surrendered to fate and lowered my legs into the rushing water below me. I never let go of that tree trunk. Wet up to my mid-thighs I found firm footing and climbed out of the water.

I found Larry, told him what happened, and then we spent the next half to three-quarters of an hour photographing various views of the rapids and the Oxtongue River above the rapids.

Back at camp with both my pair of blue jeans now wet I went looking for a convenience centre with a working dryer. I found just such a beast at the opposite end of the Lake of Two Rivers campsite and that is where I spent the next hour.

With dry clothes, I was ready for the next adventure and it would come tomorrow.

All good things must end

Pictures in the rain – Day 3

Pictures without the rain – Day 4