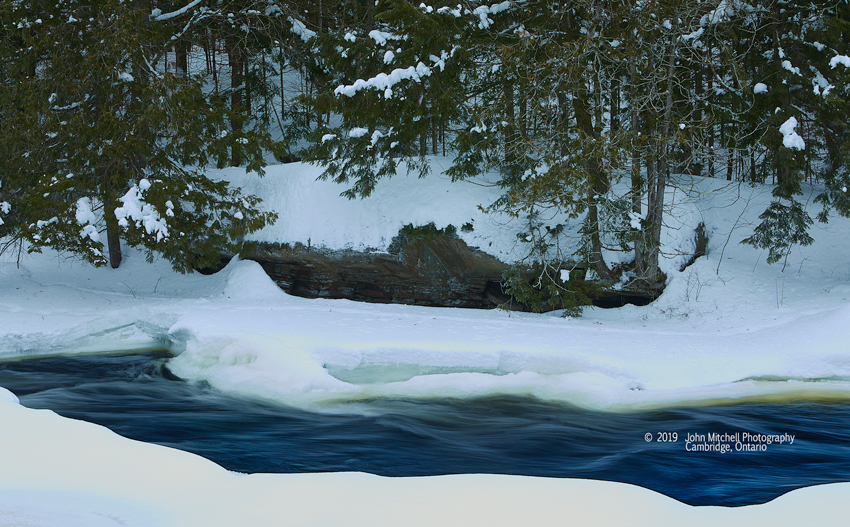 On the way to Algonquin Park we again took a side trip to Oxtongue Rapids. This time we booth put on snow shoes and began exploring areas a little further downstream. The first thing I noticed was the rushing water below me and decided I wanted to capture the feeling of the speed of its movement. Filtering the lens and adjusting my exposure to get a shutter speed below 1/2 second gave me an image showing the rapid yet smooth motion of the river.

A visit to Algonquin Provincial Park is always an adventure. When that adventure has a purpose of creating photographic art for sale and expanding and challenging the creative eye it is an “Adventure with purpose.”

Reid and I had planned on making this winter trek to Algonquin Provincial Park last year but challenges including mild temperatures that resulted in more mud than snow prevented us from making the journey.

This years colder temperatures and more than adequate snow meant the trip was back on.

The plan was to travel to Huntsville and Algonquin on Tuesday and return Friday. We would leave early Tuesday and get there in time to do some photography both in the park and the surrounding area. Wednesday we would explore the park for photographic opportunities. I was hoping for one good day of sunny weather in order to capture a sunrise. Thursday we were thinking of exploring some of the areas north of highway 60 and maybe going into Arrowhead Provincial Park. Friday we would enjoy a leisurely drive home avoiding the major highways.

The drive up was pleasant with great weather and sunny skies. We arrived in Huntsville early afternoon and headed for the park to get our day passes for the next four days (just in case we decided not to leave first thing Friday morning).

On the way to the park we made a side trip to Oxtongue Rapids Park. I became aware of the beauty of this park during my fall 2016 venture.

I entered the area via the roadway from below the rapids. As we got close to the rapids, twice we passed a sign that said “This road not maintained in winter beyond this point.” We kept going. A little concerned about suddenly running out of road I was relieved when we reached the rapids as there was still a little of the parking area left accessible to get off the roadway.

Reid pointed to an area down by the river stating he was going down there to do some shooting. I asked if he was putting his snow shoes on but he said he wouldn’t need them because there was a path. He ventured off.

I found an area with slightly higher vantage point that I wanted to shoot from but there was no path there so out came the snow shoes. I had only once previously wore snow shoes so it was a bit of a stumbling experience. As I got to the area I wanted to shoot I began packing the snow down and securing a firm footing from which to work.

At this point I should probably say that being a fan of the group of seven and Tom Thomson (Thomson was never a member of the group of seven) I was looking for opportunities to see the park as they saw it. To see the triangles of composition, the depth created by light and shadow and the use of foreground, middle ground and background to lead the viewers eye through the composition. It was never my intention to photograph the wildlife of the park – there are many other photographers that create wonderful wildlife photographs in the park and it just wasn’t what I was out to do.

As I turned my camera upstream what I saw next is the “one that got away.”  They say in life you will regret the things you didn’t do far more than the ones you do. The same can be said about the pictures you didn’t take. There was Mr. Spencer – well his head, shoulders and arms anyway. Reid had decided to join me at my vantage point but had decided to take the route less travelled and the most direct route to where I was. Without snow shoes he proceeded to discover the depth of the snow as he sunk in, and there he was in snow up to his ribcage unable to move any further.  In hind sight I should have preserved the evidence but being it was my friend my first thought (next to laughing) was to get him out so I stumbled in his direction with my snow shoes on and proceeded to stomp down the snow in front of him thus giving him a bit of a base to brace his elbows on, allowing Reid to crawl out.

We drove out the way we came in. Thank goodness we did that because as we got where the entrance to Oxtongue Rapids meets highway 60 above the rapids we found the road was completely closed and blocked by huge piles of snow.

Unlike when I had driven highway 60 in the fall and summer, at this time of year there was absolutely no where to pull over and check out the landscape. The highway was bare but on each shoulder was a pile of plowed snow 4-6 feet in height. This I had not expected.

We stopped at the west gate to get our day passes. Because I was looking for pristine landscape images I was hoping to take the path less travelled. One of the areas I was hoping to get into was Whiskey Rapids Trail but when I inquired I was informed it was closed during the winter. Many of the other areas I am familiar with were also closed. Bat Lake trail was open and we could drive into Opeongo Lake as far as the winter gate.

We proceeded to the road that went into Opeongo Lake.

That night we were supposed to experience the rise of a super moon. I wanted to get an image of this super moon on the horizon and thought if I positioned myself overlooking Opeongo valley I would have a perfect vantage point. We were able to drive in as far as “winter gate” and from there it was about a kilometer on foot to the bridge I was looking for.

While I waited for the sun to go down and the moon to come up I took advantage of the opportunity to capture some of the outstanding views in the area. 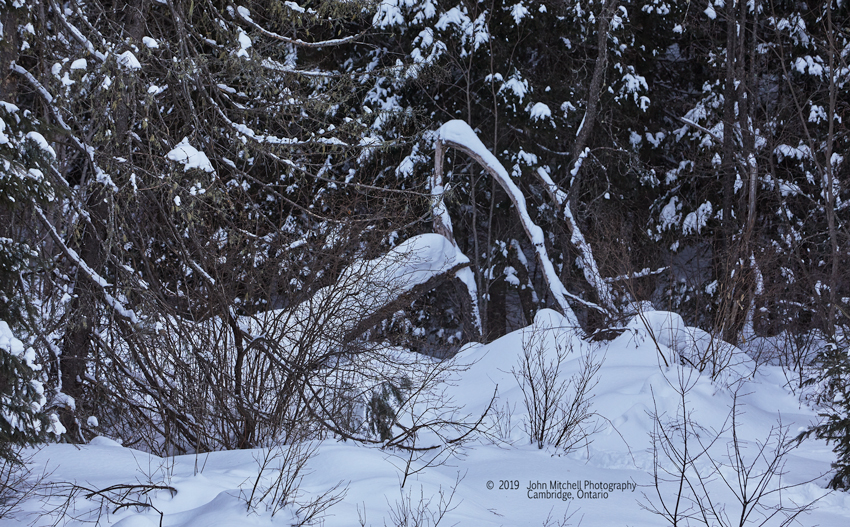 I waited and waited. The time of the moon rise came and went. My expectation of where the moon would rise was wrong and as it turned out there was a huge hill between me and the actual location of the moon rise. As we were driving out of Opeongo Road we were able to see the rising moon in the eastern sky but by this time it was too high in the sky to get the images I was hoping for.

It was time to eat and thus ended our first day.

Today we would explore the park again and try snow shoeing one or two trails. A good breakfast, some coffee for the road and load the camera gear into the SUV and we were off.

The weather was cloudy, thus creating a very soft flat light compared to the bright sunlight of the previous day.

It was time to go and explore Algonquin Park and I will fill you in on those details in part two of this write up.

Call in the wild

Pictures in the rain