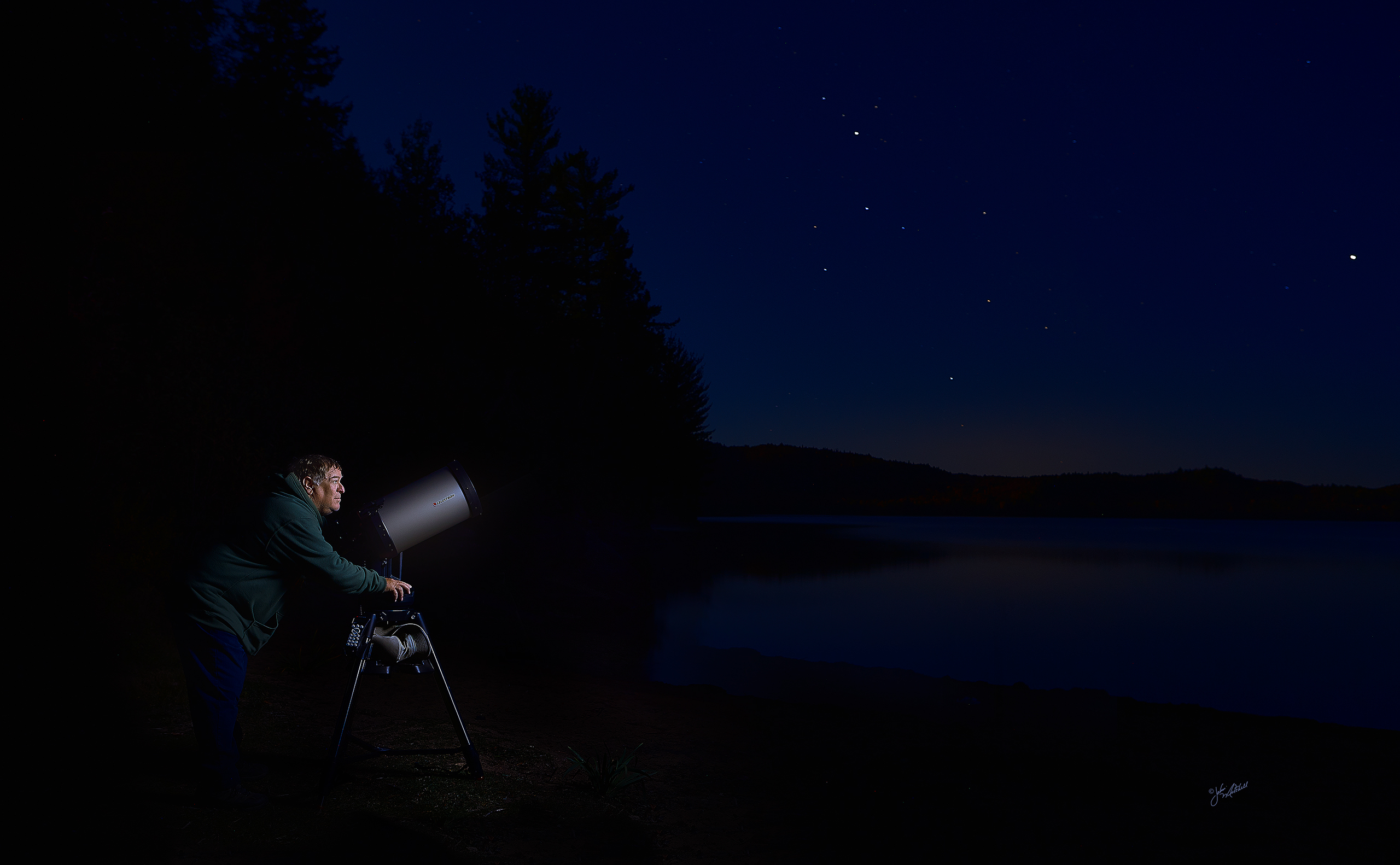 September 2019 and I planned on joining my brother, Larry, on his fall colour visit to Algonquin Park. I last went with him in 2016, and the colours were magnificent. Health issues kept me from joining him in 2017 and 2018, so I was looking forward to this trip.

Larry is very much into astronomy. I called him and asked if he was taking his telescope with him. He said he wasn’t planning on it and wondered why I asked. I told him I had an idea for a portrait of him with the telescope. He told me the sky wouldn’t be great; we wouldn’t be able to see the Milky Way. I remembered looking up during the 2016 trip and was blown away by the sight of the Milky Way. I had never seen it like that. Same sky, same stars, but I never saw it that way.

Larry agreed to take the telescope. That meant about three extra cases for him; telescope, tripos, controller, etc. For me, it meant a light, softbox, light stand, sandbags, etc., were added to my load.

Of course, taking a portrait isn’t just about setting up the equipment and pushing the button. Job one was finding the right location. I would need a clear view of the sky, and being in Algonquin meant I would have to have trees, rocks, and obviously water. The search was on.

There is a small beach on Lake of Two Rivers along highway 60. At the west end of this beach, the land juts out, forming a bit of a bay for the beach area. The area was made up of rocks and trees and would give me a clear view of the sky over the lake.

Sunset would be just before seven o’clock. The location was about two hundred yards from the area. We would have to hike in about an hour before sunset. Moving the equipment in would require at least three trips from each of us.

With the equipment set up, I gave Larry some direction on how I wanted him to pose. A couple of test shots confirmed the angle was right. With that done, I tacked the biggest challenge of getting the picture: the lighting. It was going to be very simple, just one light. A few test flashes to measure the light showed me where I would need to set it to get the desired intensity. A test exposure proved I would have to get it even closer to control the spread of light. Moving it closer meant readjusting the power to yield the proper exposure. The problem: the light is now in the shot. I would have to make two exposures, one with the flash to light Larry and his telescope and one without any strobe to capture the sky and stars.

With everything set, there was only one thing to do; wait.

As the sun dropped, so did the temperature. In the chill of the fall night, we waited. The sky had gone from blue to crimson with yellow hues and gradually turned to violet. Deeper and deeper.

With a planet and a few stars visible, the time came to start shooting. Larry took his position. Even with the flash firing, Larry would have to hold still for 30 seconds. (The time I needed to capture the detail in the night sky and lake and not get star tails.)

After making several exposures, I asked my brother to keep his position. Simultaneously, I removed the flash from the scene and then made a couple more exposures to lay over the first images where the strobe had been.

The images were sandwiched in post-processing and saved as a new file. The result is a portrait of my kid brother showing his passion and love for astronomy. I am glad I invited him to participate in this “Portrait by Invitation.” The Astronomer is a fine art print, varnished and glazed, bringing out all the subtle details in the deep shadows of the night.

I continue to look for ideas and inspiration for my next “Portrait by Invitation.” If you have any ideas, you can reach me here.

The Colonel was invited.