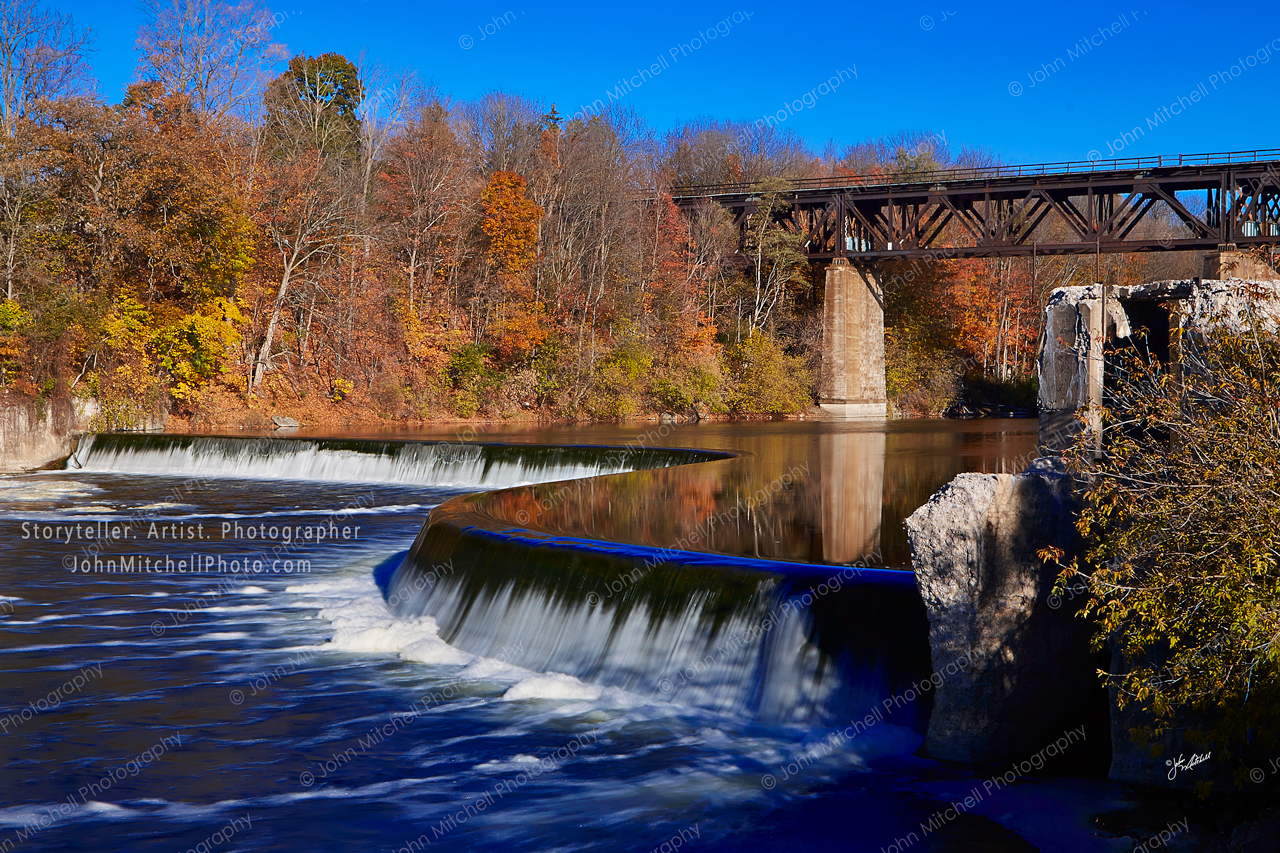 Before you make a picture you must first see with your eyes.

I wanted to get out and create some images of the fall colours. There’s a spot that I have been watching for a few years now, telling myself I need to go for a hike through there with my camera. It’s an hour and a half drive away near Lake Erie. I didn’t have time for that, yet knew if I didn’t do it now I was going to miss all the colour this year. So I compromised. I hadn’t been to Paris since they rebuilt Penman’s dam and decided that I would take a drive to Paris – Ontario.

Time was limited but I took a drive down East River Road through Glen Morris and into Paris. When I got there I found there was a lot of road construction in the area of the dam but managed to wind my way in with the help of my GPS and park near the dam.

I grabbed the camera bag and tripod from the trunk and hiked up on top of the brim. Two other photographers had arrived just ahead of me. They were busy taking pictures, moving their camera a few feet and taking more pictures. That’s the way I used to do it.

I see things differently now. First I see with my eyes. Then my mind’s eye. Then I create.

A few years ago I read an inspirational piece that asked the question; “what would happen if instead of considering yourself a body (person) with a soul, you considered yourself to be a soul occupying a body?” How would that change your perspective?

Applying that to photography, “what would happen if the camera didn’t take the picture, but only recorded what you saw?”

I looked around. I could go left below the dam or right above it. The other photographers were to my left. I went right.

Paris is a small, but growing community that sits in a valley with a river running through it. (Actually two, as the Nith meets the Grand in Paris.) The village is the valley has an old time downtown with angle street parking, storefronts of an age gone by and towering church steeples. I wanted to get the feeling of this village in fall. I wondered up stream looking down into the village from a variety of levels on the brim, looking at foreground, colours, reflections, and the village in the background. I found an angle where the foreground didn’t obstruct or cross the one church steeple and moved around in that area until I had determined my best view. Only then did I get the camera and tripod.

I paid attention to what I was seeing. Took an incident meter reading to determine light intensity and then made mental adjustments for filtration, depth of field and the length of time I wanted the exposure to be. Only after all these considerations were made did I make the exposure. 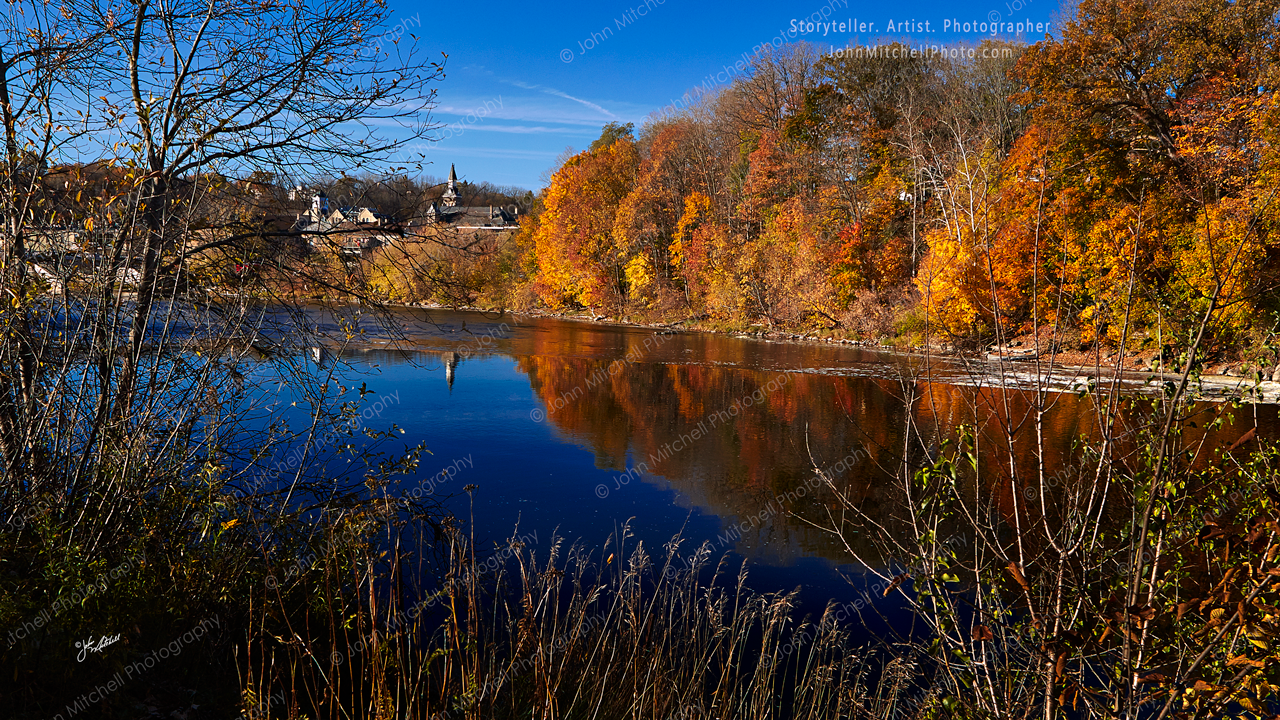 I could only spare a half hour or so at the site so I quickly moved left past the other photographers to a point below the dam. I set the tripod and other equipment down and proceeded to walk around the area that would allow me a view of the new Penman’s Dam. I found three angles that I liked for different reasons and went back to where I had left the equipment.

The first image would be from a higher point on the brim. The new dam was built with an “s” curve to it and I wanted to feature that unique characteristic in the image.  I also wanted to have the feeling of motion in the water going over the dam. I chose my filtration and exposure and positioned the camera on a tripod.

The next image would be lower and closer to the river where I could use the curve of the dam as foreground|middleground. 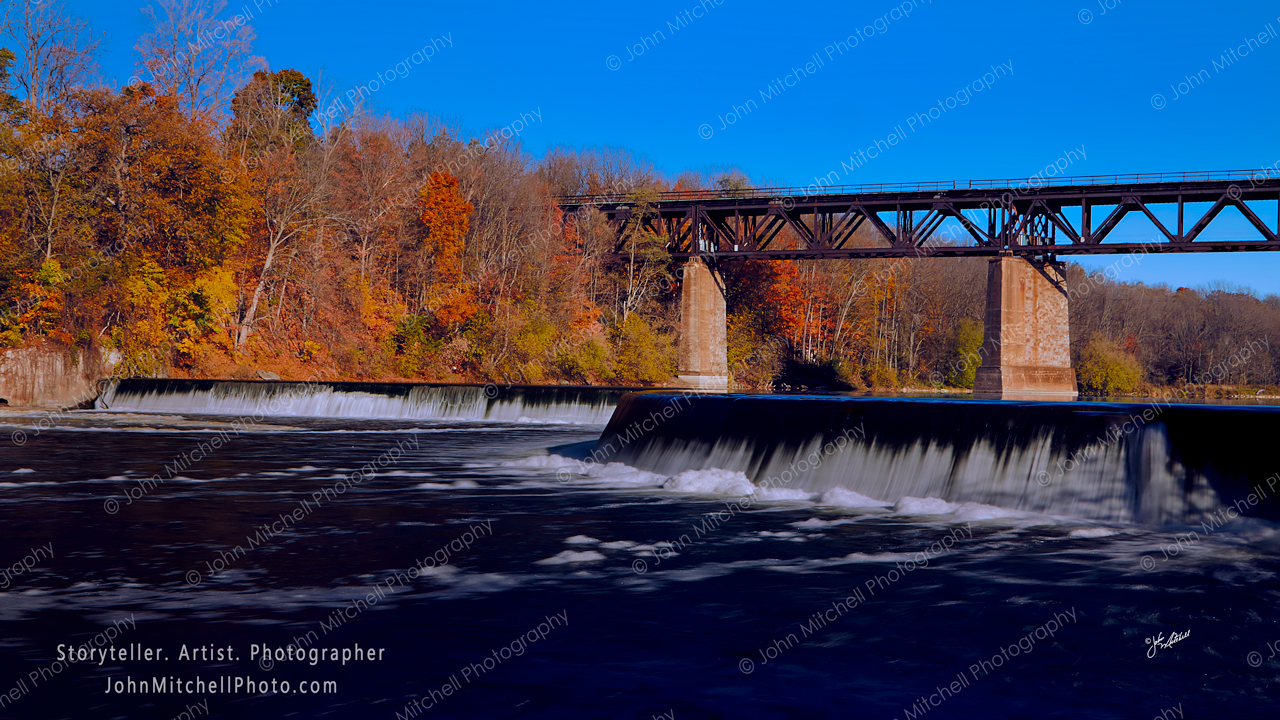 Then a change of lens and perspective gave me an opportunity to use only a portion of the dam as the foreground, thus giving depth to the image. 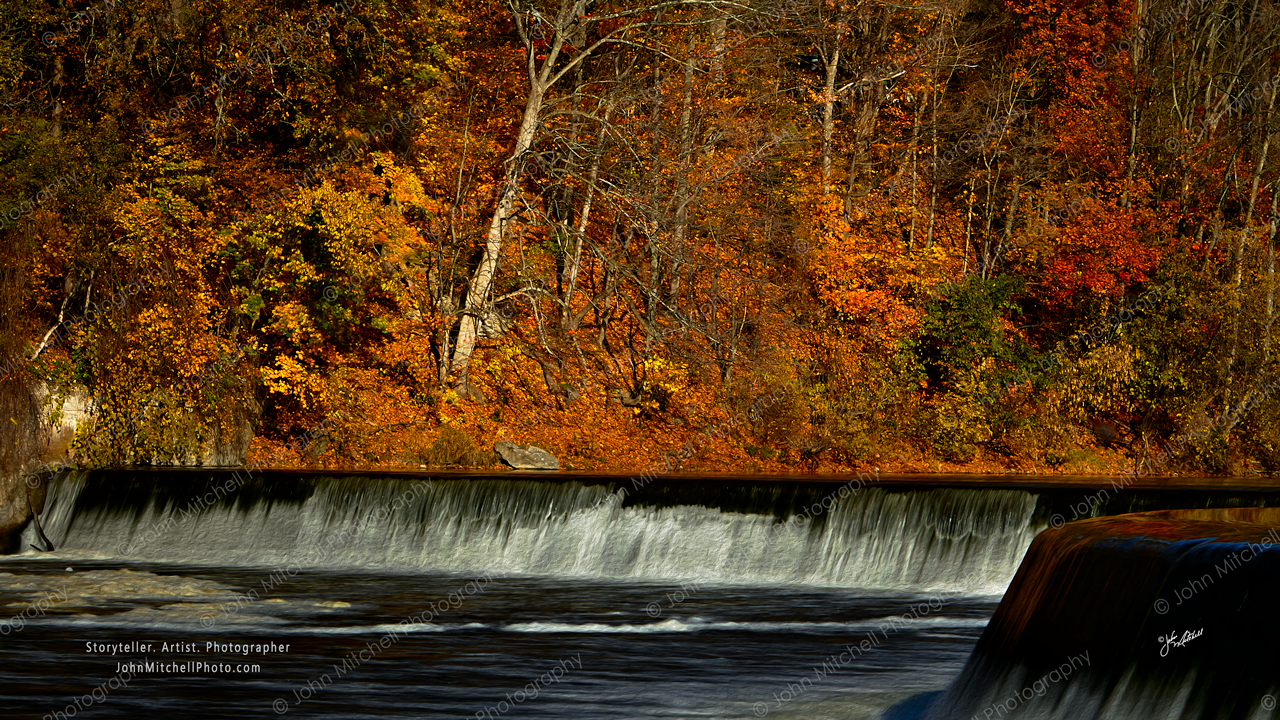 Turning the camera upstream gave me the opportunity to use the top of the dam as the base for an image looking under the railway bridge. 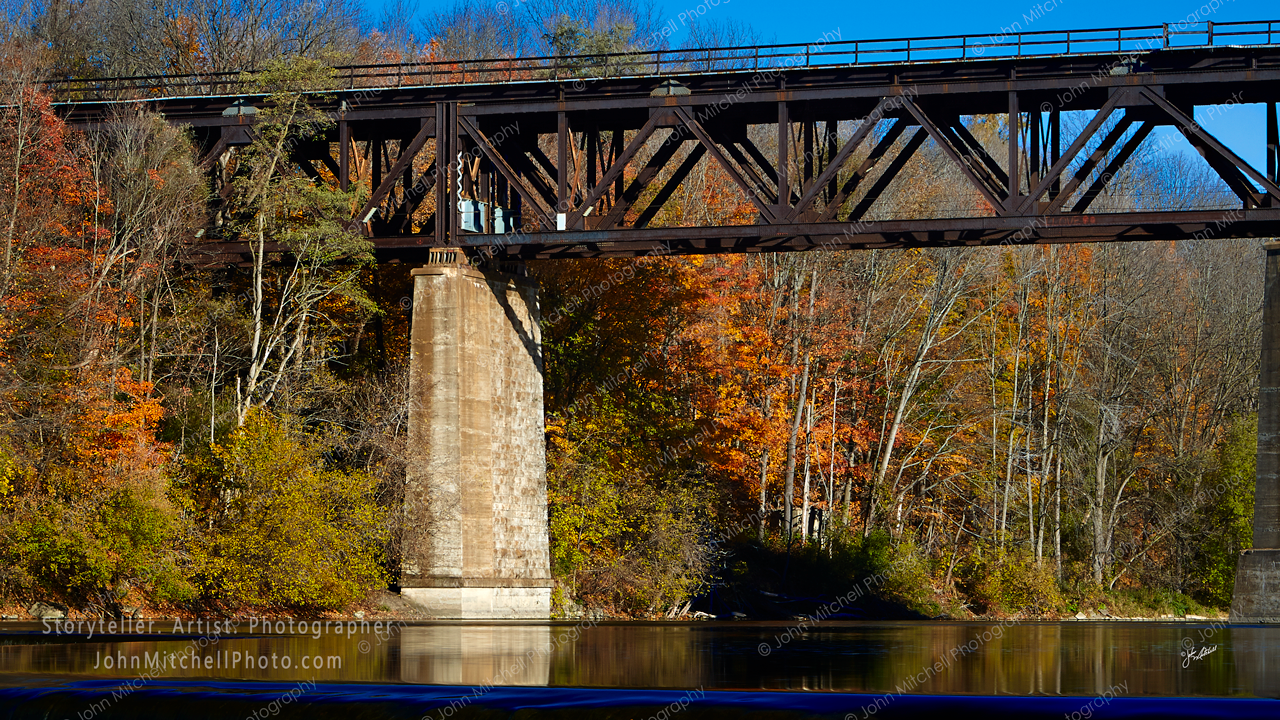 Because I had taken the time to see with my eyes first and then used the camera as an instrument to record what I saw, I was able to capture 5 images in under a half hour and be on my way home.

I decided to take a different route and swung across to West River Road coming back. As I reached the crest of a hill I noticed one red leafed tree amongst a stand of white birch trees and pulled over. The scene was strongly back lit and I had to carefully interpret what the meter said, apply some filtration, before making this capture. 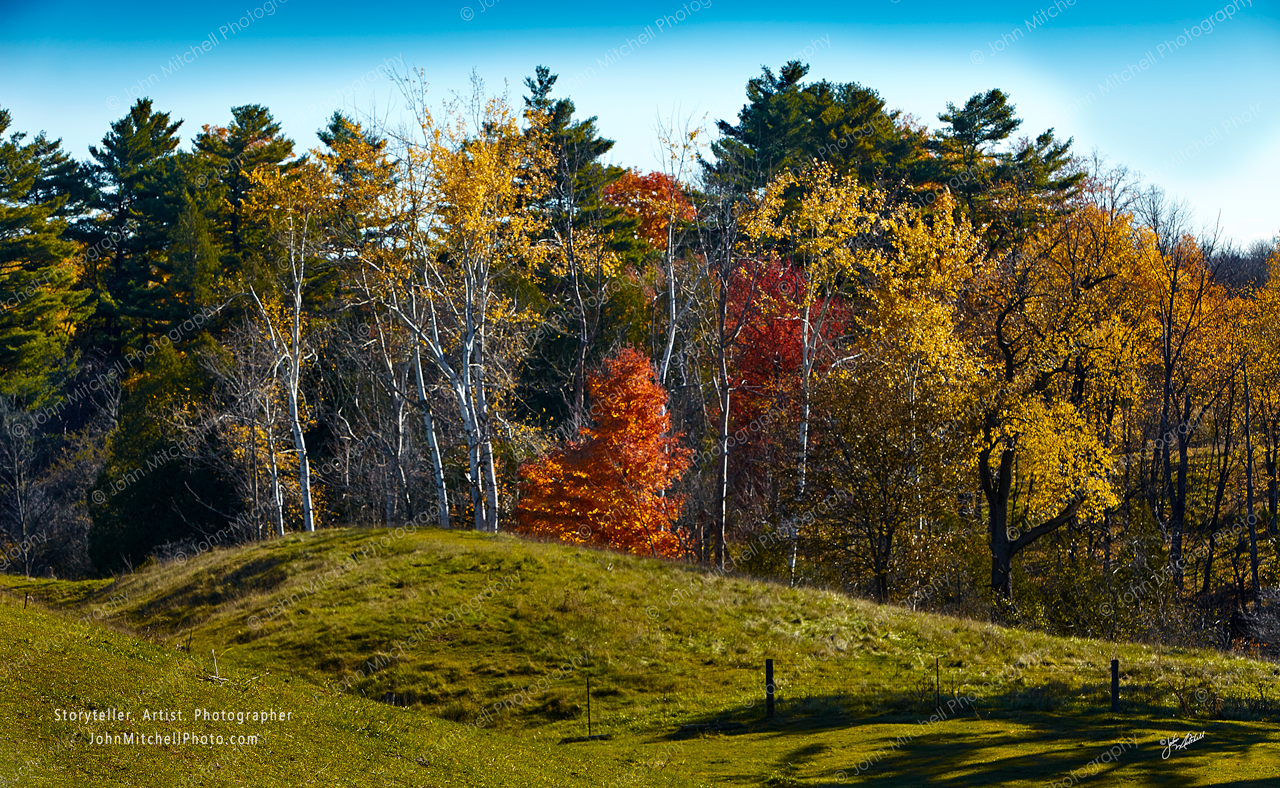 Getting out and exercising my mind and my eyes is both relaxing and educational. It reminds me that even with all the new gadgets and settings on today’s cameras, they are still just an instrument to capture and preserve what we see with our eye as well as with our mind’s eye. First I see with my eyes, and no technology is going to be able to replace the art of seeing.