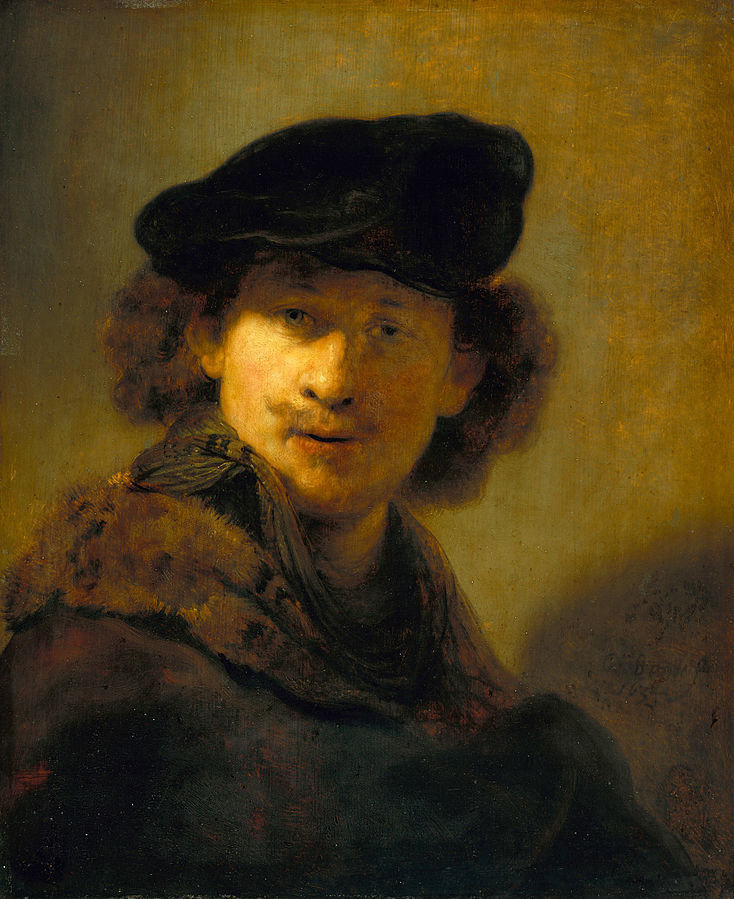 Early in the decade of the 1660’s Rembrandt received a large public commission. Offered initially to Govert Flinck, a student of Rembrandt’s Flinck had died only after making a rough sketch. Rembrandt was to paint “The Company of Julius Civilis,” to celebrate Dutch independence. The painting was to show the banquet given by Civilis, at which they swore to end the Roman occupation.

Hung in 1662 and returned after a few months with the explanation,

“Keep your painting, we’ll get someone else to do it the way Flinck drew in his sketch. The whole idea is to celebrate the glory of our new country. We can’t have you showing our hero, Julius Civilis, looking like a one-eyed bandit, one of his eyes gouged out for all to notice, even if Tacitus records it that way. The whole point is to raise our history to the stuff of legend, out of this world of imperfection. And the way you slapped the paint on in thick daubs–we can even see the marks of the palette knife — it just won’t do. We’ve had too many complaints. Take it, it’s yours.”

Pages 136-137 of How Rembrandt Reveals Your Beautiful Imperfect Self – Life Lessons From The Master.

There are a couple of points of view worth further consideration here.

Why was the painting rejected?

Rembrandt had recently changed his style. Bolder, more robust brushstrokes were contrary to the popular smooth finish and exacting detail of the time. Rembrandt wasn’t just duplicating the detail but was expressing the mood of the moment. The public was not ready for his advancements, which raises the question, should artists limit their growth to the market’s tastes or grow their talents in hopes the market will appreciate better art?

Secondly, consider the question, for whom is the art created:

“Refuse to lower your standards
to accommodate those who
refuse to raise theirs.”

It’s a question artists face all the time; do I do my best work or the work they want and expect?  In Rembrandt’s case, he had grown beyond just painting what he saw, but what he felt. Rembrandt started to incorporate a style he believed brought to life the essence and character of the subject. The danger in doing this, you may expose emotions the subject would prefer to keep hidden.

The decision on whether to play it safe or show your newly developed talents may come down to dollar and sense. Do you grow as an artist or create what will sell and allow you to pay your bills.

We cannot minimize the fact that a good portion of the reason Rembrandt’s portrait “The Company of Julius Civilis”  was rejected was due to the number of subjects.  I will be going into much more detail on this subject in a separate series of posts. Watch for them under the new category “Relationships in Portraiture” on this blog page.

I’m not a play thing