You wouldn’t think of a drive along the Welland Canal as educational entertainment. I didn’t.

I avoided the main highways as I drove from Cambridge, toward the Niagara Peninsula. Arriving in Port Colborne, we sat at the edge of the canal and enjoyed our lunch. It was a bright sunny day with lots of big fluffy clouds. While Jan finished her lunch, I did what photographers do; got the camera out, and took a few snaps. If you don’t know, Port Colbourne is where the Welland Canal meets Lake Erie. 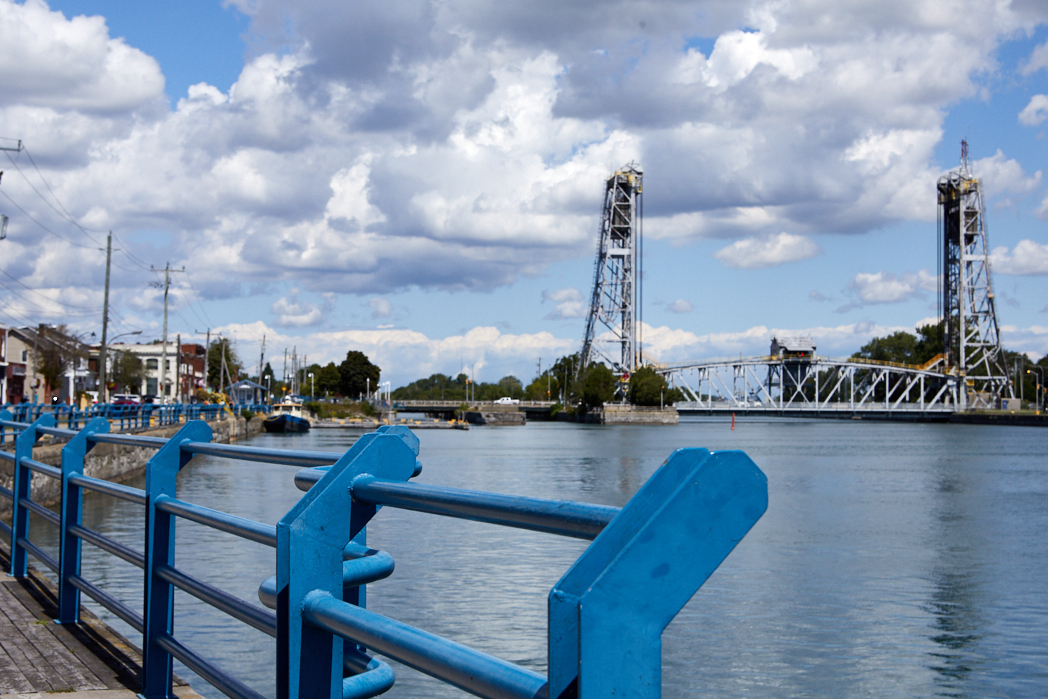 After lunch, we headed off along the canal toward Lake Ontario. After several dead ends and detours, we arrived in Thorold. Number seven of the eight locks is in Thorold.

Approaching the canal, I could see the control tower on a ship, and I told Jan, “it looks like we just missed one.” We stopped at lock seven anyway and had a brief look around. We were just about to leave when I looked upstream and saw the control tower of the ship again. It was heading our way. We were in luck and stayed around to watch this ship go through the lock, descending as it progressed toward Lake Ontario. As it left the lock, we departed.

A mere couple hundred yards downstream, another ship was waiting to enter the lock. It was undoubtedly the largest vessel I had ever seen in the Welland Canal. We turned around.

Ever so carefully, this monster moved forward into the canal at the pace of a snail. I didn’t think it would fit.

Once in place, they began the process of raising it. It was heading upstream to Lake Erie. So tight was the fit you could hear the loud moaning of the steel hull as it contacted the walls of the lift lock.

The entire process took well over an hour.

As the ship sailed upstream, we could see the Hong Kong registration on the stern.

I knew the current Welland Canal wasn’t the original. Later that day, I discovered this is the fourth canal, each built to accommodate larger ships. According to Wikipedia, the land was acquired for a fifth canal, but the project was later canceled. Will there ever be a fifth Welland canal?

It was an entertaining and educational day.

An idea worth expanding.