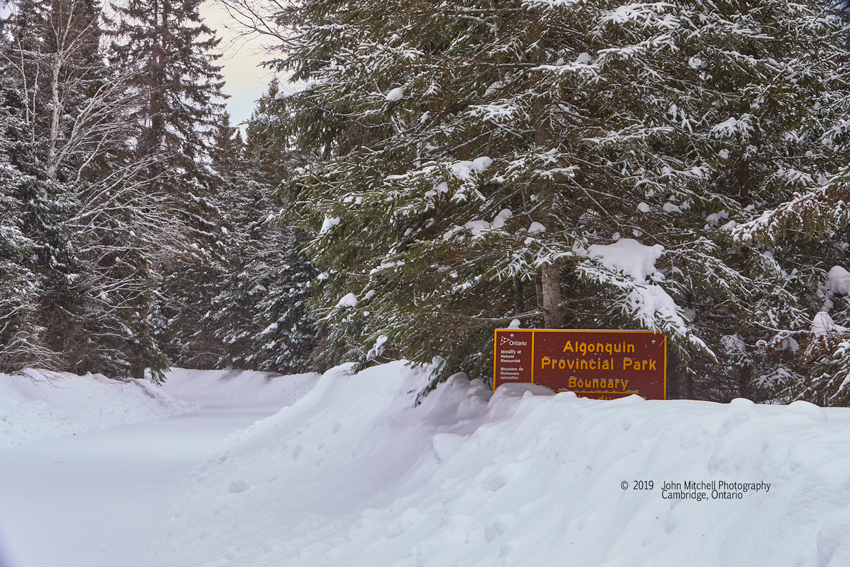 Even the drive is an adventure.

Driving out of Oxtongue Rapids we picked up Highway 60 and headed east.

To put this into perspective, if you have never driven through the park on Highway 60, the drive from Huntsville to the east gate is about the same as driving from Cambridge to Toronto; 99 kilometers. The difference is this drive is beautiful and exciting.

Before we got to the park we stopped at the Algonquin Outfitters Store at Oxtongue Lake to have a look around. This is a toy store for the adventurous at heart. Like any toy store location is everything and they are exactly where they need to be for enticing big kids with big ideas. I’m a big kid and splurged on a set of poles for snow shoeing.

Now I’m ready for the adventure. The plan is to drive through the park and check everything out and decide where we are going explore, then turn around and work our way back through the park hitting all the points of interest.

As we drove east:

With that we were approaching the east gate. We continued to the town of Whitney where we turned around and started back.

It’s time to try the snow shoes and the new poles.

It seems we walked forever and were still walking further and further away from the parking lot. Before setting out we had looked at the map and decided to walk the circular trail counter-clockwise as far as Bat Lake and then return via the same route to the parking lot. This was the shortest way to Bat Lake, but at this point it wasn’t seeming all that short. When I had walked the trail in the fall of 2016 I had done it in a clockwise direction  and nothing seemed familiar at this time.

We did go a little further before turning around, taking the same path back to the parking lot. Now walking in the same direction as I had in 2016 I saw similarities in the trail, but all that white snow sure changes the way things look.

Upon returning to the parking lot it was time for a little rest and something to eat. Reid had bought sandwiches in Huntsville before we set out earlier. The coffee in the thermos was still warm. Being re-energized from the coffee and sandwich it was time to go explore some more.  There were still some images along the road going to Opeongo Lake that I wanted to try and get, so that’s where we were off to.

By the time we had the images we wanted along Opeongo Lake Road we were pretty tired from our walk on Bat Lake trail and decided to call it a day and head back to Huntsville, dinner and a well deserved scotch.

We had already decided that this day we would travel north a little further and possibly explore Arrowhead Provincial Park. Things didn’t exactly go as planned but this was likely the most adventurous and rewarding day of our trip.

We were staying at the Comfort Inn in Huntsville and the room included breakfast so after some nourishment and much needed coffee we loaded the Subaru with camera gear and we were off with no real idea of where we were going.

Avoiding Highway 11 and sticking to side roads we headed north driving right past Arrowhead Provincial Park.  We took several side trips to check out the many lakes and streams.  I mentioned to Reid that I thought there was a road that seemed to go right to the west border of Algonquin Park. The map showed that we would have to start in a place called Kearney so off to Kearney it was. After a few wrong turns we found ourselves in the town of Kearney.

What seemed like an eternity later we came to a fork in the road, if you cold call what we were on a fork. Which way do we go? On the fork to the left the snow is pristine. Not a mark. Not a tire track or snowmobile track. There are tire marks on the right fork. At least we know that at some point since the last snow fall someone has been down that road so if by chance we end up in real trouble there is a better chance that somebody might find us before summer. The road has more twists and turns and is going downhill somewhat. We rounded a corner and entered a clearing. I’m not sure I would describe it as being in the lumber camp but there ahead of us was a large transport truck parked while a crane dropped tree trunks onto the trailer about 3 at a time. (I have marked the location with an “A”.

It was quite the site. We watched the loading of a few tree trunks. Part of me wanted to get out and take a couple pictures, but that was a small part of me. The rest of me was afraid they might not like having someone take pictures of their operation due to the number of tree huggers that like to protest that sort of thing. Then there was the thought that better get the blazes out of there before they had that truck loaded and he decided to leave. I still wasn’t sure if there would be enough room for my Subaru and that lumber truck and I really wasn’t in the mood to play chicken.

There was enough room for a quick “3 point turn” and we were on our way back up the winding hill.

At the top of the hill we were right back at the fork. We now knew where the right fork went and we still hadn’t seen any evidence that we had reached Algonquin Provincial Park. So what choice did we have?

Slowly we drove through this tranquil setting taking in the view of lakes, bogs, and woods. On the right side was the most beautiful creek with open water between drifts of snow. We would stop here on the way back out for some image making.

Just a couple hundred yards down the road we went around a bend and there it was!

Another hundred yards or so and we ran out of road. It was time to turn around.

On the way out we did meet a lumber truck that was going in for another load. I pulled over as far as I could and stopped. I figured he was much better than I at maneuvering these narrow roads so I just sat there until he eased by me.

There was still a little light left in the day so we headed back to Huntsville and east on Highway 60 toward Algonquin Park. We came to Oxtongue Lake before we got to the park and took a detour down one of the side roads. At the end of the road was a snowmobile trail where the machines would exit / enter the lake.

With that it was time to return to Huntsville for a good meal and some good scotch.

The next day was travel day to get home.

We had a good trip and it was time for a relaxing quiet drive home to take time to let it all sink in. We chose a route that was largely cross country without the rush of traffic.

I’m already thinking of what I want to do differently next winter. There are so many areas that I haven’t explored yet. Of course that doesn’t mean I want to wait until next winter to go back to Algonquin Provincial Park: there’s the spring trip, the summer trip, and I think I already know where I want to go for the fall trip. Can you guess?

All good things must end

My introduction to Achray