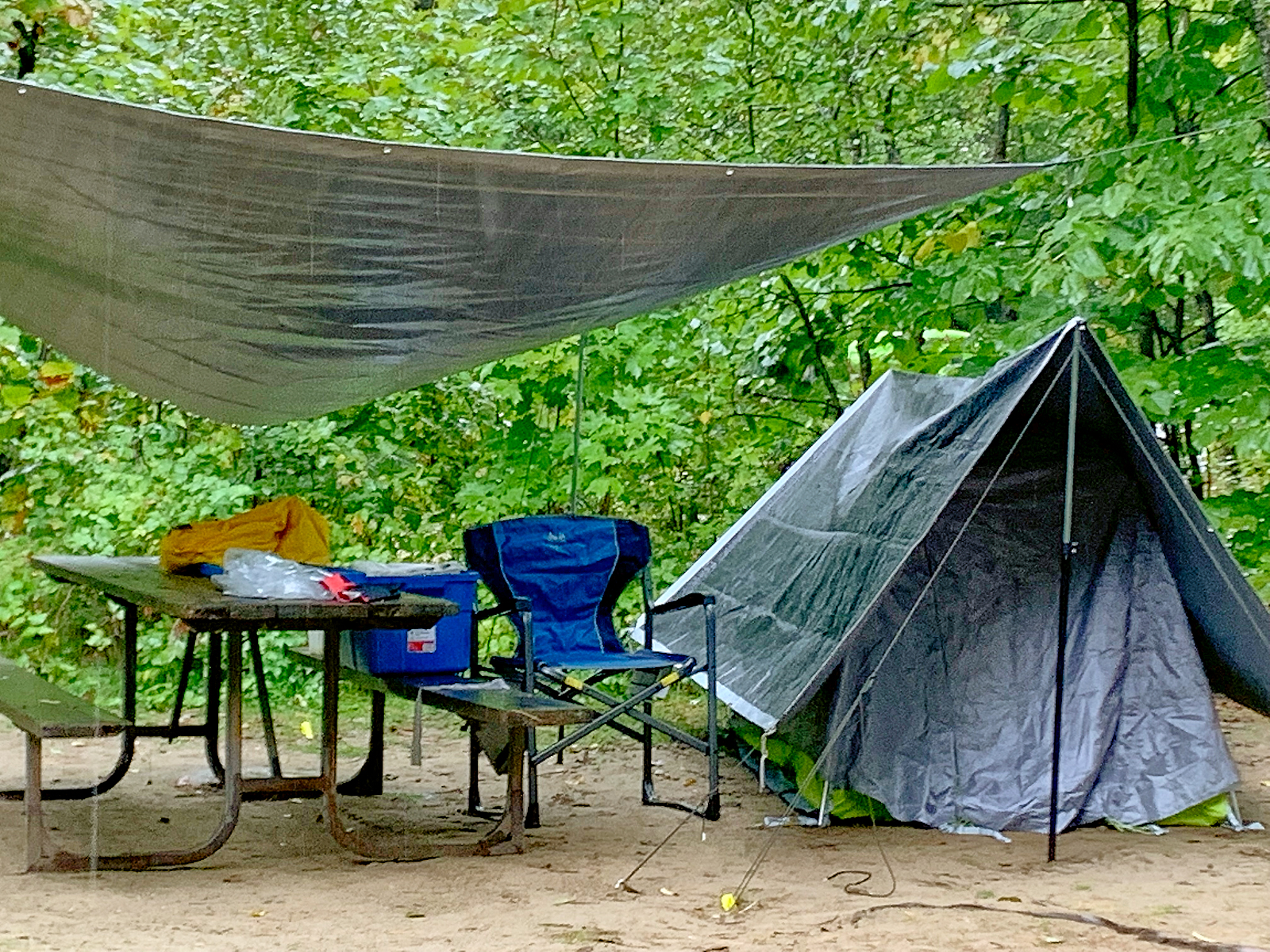 Did I get beat or did I wimp out? Personally, I don’t know; maybe a little of both. Regardless, I’m disappointed.

For a month I have been looking forward to and planning my 4-night, 5-day trip to Grundy Lake Provincial Park. I knew bears were active in the park so I bought a bear-resistant Yedi cooler to keep perishable food in. I planned accordingly and was very much looking forward to kayaking and biking in the park. I was hoping to drive to the mouth of Key River and kayak upstream and back to the car. Google Earth showed some fascinating rock formations along the river that I wanted to see and photograph first hand.

As the date approached I was watching the weather forecast closely. It was going to rain on Monday (travel day) which meant setting up camp in the drizzle. Tuesday was going to be cloudy with a 30-40% chance of precipitation and then Wednesday to Friday were to be sunny and nice. (Nice for this time of year.)

Monday, under sunny skies I headed north. It was a pleasant drive until I got about halfway between Barrie and Parry Sound. The sky clouded up and I drove in and out of spots of drizzle. The closer I got to Parry Sound the more the drizzle turned to rain. I decided to refuel the SUV and myself in Parry Sound.

Over lunch, I looked at the weather forecast and radar. It looked like the rain was a narrower band than originally anticipated and that it would stop raining around Brit. The provincial park should be dry. Things were looking up.

Refueled and recharged I hit the road, anticipating the rain to let up and stop anytime. It appears no one showed Mother Nature the radar. The rain kept coming – harder.

Finally, as I approached Grundy Lake Provincial Park the downpour turned back to drizzle.

I stopped to get firewood at the store across from the park entrance. I took another look at the weather forecast and now they were calling for cloudy conditions Wednesday as well. In fact, they were calling for temperatures to drop to 4 degrees Tuesday night, feeling like 2 degrees Celsius.

Entering the park I was greeted by a sign that read “You’re in Bear Country.”

When I went to check in I inquired about the site being available on Friday night and it was. I decided with the weather not being so great Wednesday I could extend my stay and leave Saturday instead of Friday and thus have another good day.

At check-in, I was presented with the park rules. Because of bear activity all food, cooking material, hygiene products, etc must be kept inside a hard-sided container (vehicle) Translation; if it has an odor, it can’t be outside when you are not in the campsite. You can’t even leave empty Rubbermaid containers stacked up under the picnic table. My bear-resistant Yedi would have to be kept in the SUV.  If you left anything out and left your campsite there was a $125.- fine.

According to the rules, you couldn’t even leave your stuff inside a tent trailer as it doesn’t have solid walls.

I found my campsite and spent the next couple of hours trying to string up tarps and set up my tent. Did I mention this is the first time I have gone solo camping since I was a Queen Scout some 55 years ago? Things are a little different today. Tents aren’t made of canvas and they don’t have ridge poles.

Camp set up it was time to sit under the tarp and enjoy a good Scotch. I also had a good book.

Thank goodness I stopped in Parry Sound for a good meal on the way up. Snack food would do for dinner.

Well, it started to feel a little cool so I decided to see how good that wood I bought was. And test my memory on how to start a fire. I took out a couple Birch logs and with an axe in hand made some kindling wood, added some firestarter, and a little flame from a lighter.

There was a spark, and the spark turned to a flame, and then there were some crackling sounds as the wood began to burn. Eventually, I had a nice fire going and the heat felt so good. Gusts of wind would blow through the campsite and I was even more grateful for the flames at my feet and their warmth. I sat up until I had managed to burn through an entire bag of wood.

It was time to turn in. I’m so glad that I decided to bring the heavier sleeping bag.

Tuesday morning I dragged everything out of the car and made breakfast, washed dishes, and then put everything back in the car. After that, I decided to go for a bike ride around the park and familiarize myself with my surroundings. It was cold but worse than the cold was the wind. The forecast said sustained wind at about 18 km/h with gusts up to 30 km/h. When those gusts blew the cold just whipped right through you. A 41-minute ride was all  I could handle.

During this ride, I was checking out other campsites and to my amazement, I was the only idiot in a tent. Everyone else was in a trailer of one form or another.

I wanted to check the lakes and look for places I wanted to take pictures of. Gurd Lake had ripples on the surface. Gut Lake looked pretty smooth, and Grundy Lake had little waves and a definite current. If I was paddling against the current on Grundy it was going to be a bit of a workout. The real problem was it was so cold and breezy I had no desire to be on the water.

Back at camp, I did my best to keep warm. I decided to go to the supply store across the road for some more firewood. I was going to need it for cooking the meal later in the afternoon. I had plans to cook a steak over the fire and a foil pack of veggies in the coals of the fire.

I kept having second thoughts about this meal. By the time I got the foil packs unwrapped and the food on my plate the food was going to be cold. There’s nothing worse than a medium rare fillet that’s cold.  At the store, I asked where the nearest restaurant was and was told 40 minutes down the side road in Port Loring. Well, that was a little far but not really any worse than going into Huntsville for something when camping in Algonquin Park, so off I went.

Every time the wind gusted I got a chill. I wasn’t having fun. I phoned my wife and said I’ll be home tonight.

I am still asking myself, did Mother Nature win, or did I wimp out? Should I have stayed?

The real question is what have I learned from this experience?

I wasn’t prepared for the weather. I didn’t have enough meal plans that were hot, quick, and easy to serve.

I didn’t have the right clothes. I should have had a winter coat at the very least, and a pair of gloves.

What will I change?

I may look at selling my 3 season tent and getting a four-season all-weather tent.

I’ll pray for a lottery win so I can buy a trailer.

Don’t always plan ahead. Check the weather forecast and if it’s good see if there is a campsite available that I would like to occupy for a few days.

Make contingency plans for what you will do activity-wise in inclement weather.

This trip was a big disappointment, but there were lessons learned that will make future trips better. So, I guess it wasn’t a total waste.

Looking for a little inspiration?