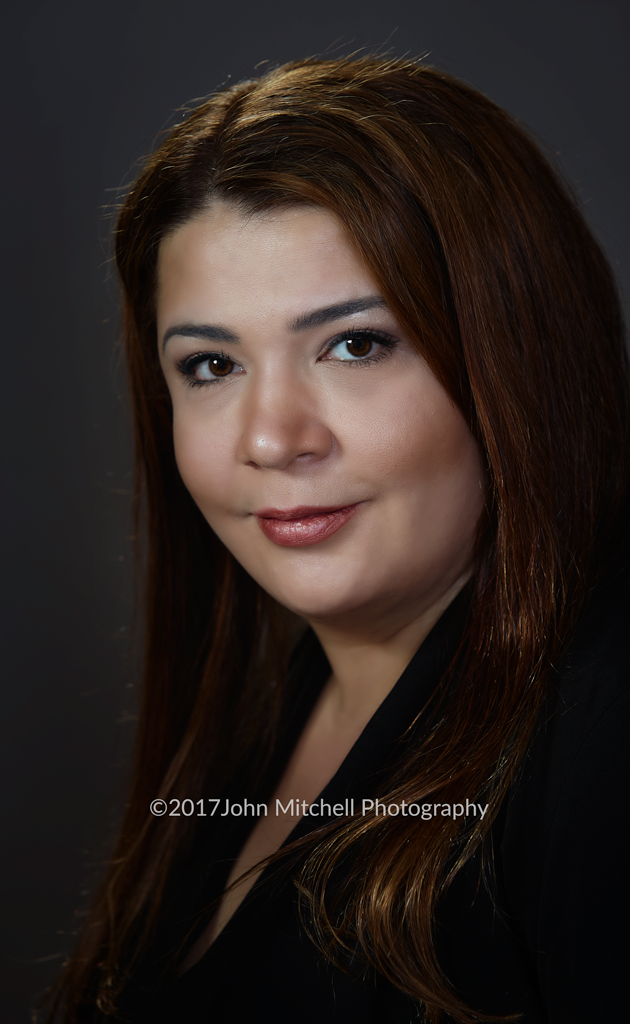 This week I completed another successful portrait for business. That’s not the same as a business portrait.

A business portrait is generally a head shot that artistically illustrates, in a flattering way, the subject who is in business, whereas, a portrait for business is first a portrait of a person then it is used for business.

The oxford dictionary defines portrait as:

A painting, drawing, photograph, or engraving of a person, especially one depicting only the face or head and shoulders.

“Trait” is defined as “A distinguishing quality or characteristic, typically one belonging to a person”

It is for this reason that I don’t believe a photograph of a person is a portrait unless it makes a statement about that person’s traits or personality.

It had been years since I had Lina in front of my camera, but when she called me and said she wanted me to create a portrait and only when I asked what it was for did she say it was going to be used for business.  I knew then that she knew the difference.

I am a dedicated and adaptable individual with over 10 years commercial experience and a proven commitment to both professional and personal development. I possess a wide variety of commercial skills from roles in real estate residential and new homes sales, and construction with the tenacity and drive to succeed in whatever I put my mind to. A real team player – I have 4+ years of team based experience with award winning teams. Licensed Real Estate Salesperson since 2005.

I outlined the procedure and made the appointment. When I arrived at her home we began with a discovery conversation.  I asked Lina to tell me what she thought was her most appealing facial feature and she told me her smile.  I mentioned that I had read in her profile that she knew how to read blueprints, and she explained that “new home sales” with Grandview Homes meant she had to know how to read the blueprints in order to customize the home to the client’s tastes and needs.

When I asked Lina what made her different from other real estate people she said “Well I often hear I’m not pushy. Client’s thank me for letting them make up their own minds.”  I asked if she  considered herself more of a consultant. She thought about it and said “yeah, I give people the information they need to make their own decision.”

The Session and Results

With that information I told Lina that I could see three different portrait options and if she was willing we would do all three and she could decide on which she wanted after she had seen the previews. 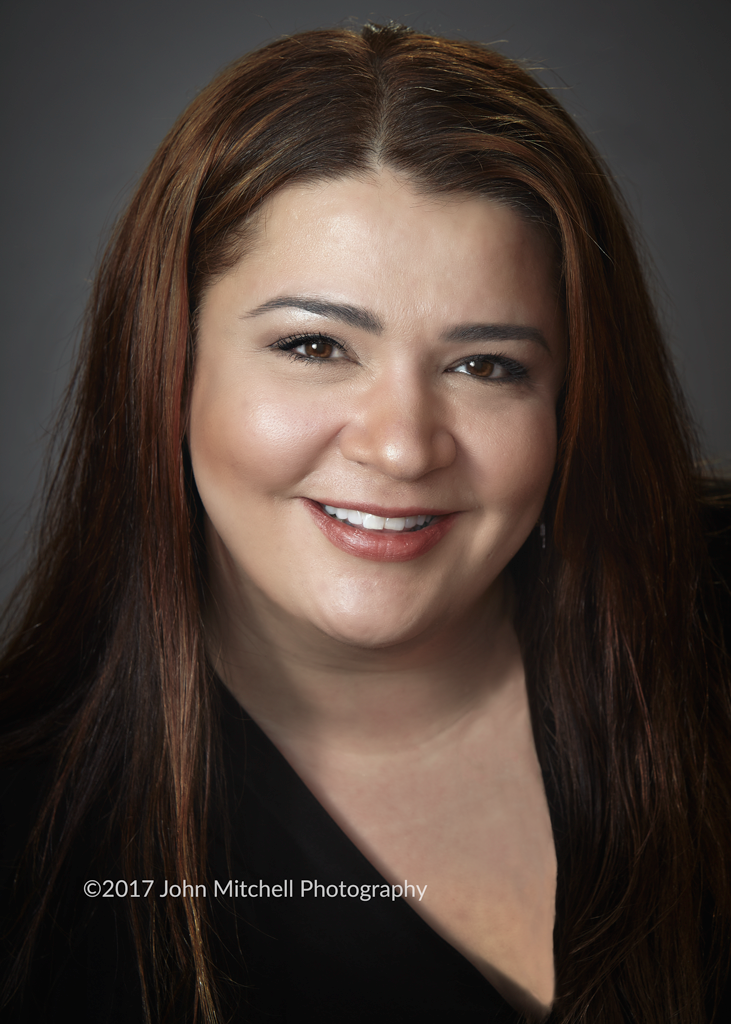 The first portrait I wanted to be open and inviting. It would feature that smile she talked about and make a statement about how warm and approachable Lina is.  What I look for in these portraits is the right smile. It has to be genuine and the smile in the eyes must match the smile on the mouth. With some direction from me we had this shot after only a few exposures. Because of Lina’s soft skin texture I decided on a softer light with a large translucent umbrella as the fill and a beauty dish as the main light. 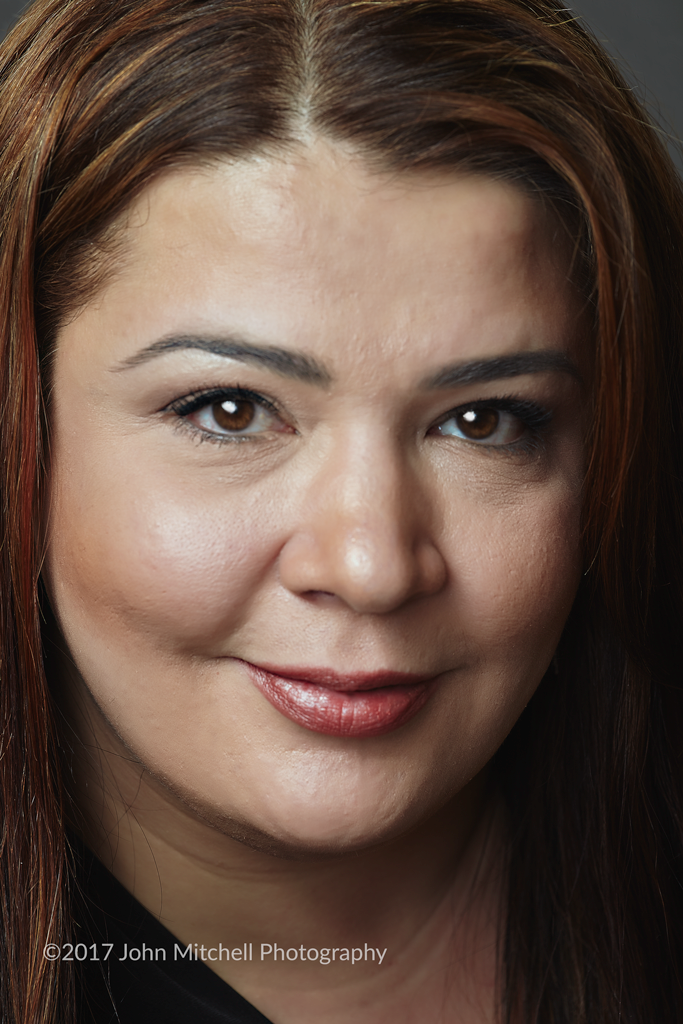 The second image I wanted was a friendly yet slightly more serious image. One where the viewer would feel an immediate connection with Lina and feel that she was listening to them. For this I wanted to emphasize those big brown eyes. The eyes, after all, are the window to the soul.  To do that I came in close using a macro lens.

For the third portrait I wanted to express the idea of a consultant instead of a “sales person.”  A consultant is an advisor, knowlegable and trustworthy. First I didn’t want a big smile. I didn’t want the image confursed with the used car saleperson look, so I turned the body further from the camera to give the viewer a feeling of observing the subject instead of interacting with the subject.  I wanted the head and the eyes brought back to the camera – listening to the viewer. More dramatic lighting would be required with a stronger sense of direction. To do this I switched from a beauty dish to a 16 inch parabolic with barn doors, moved the light to create a modified loop and then slightly softened the light with a bounce from the mainlight side to wrap the light around the face. (The technical desription is merely for my photography friends that might be reading this. I do not like, and seldom use, softboxes in my portrait lighting, but I will be covering that in a future article in the next couple weeks)

Lina chose four different images that she will be able to use in different scerenious. My point is that instead of just creating a portrait with a nice smile that was designed for business I found out what made the subject unique, created a series of portraits that hopefully exhibit her personality. The fact that she will use these images to promote her business is secondary to me.

When we were done Lina said she had never had someone set up a studio in her home and she had a great time creating the images with me.  If this sounds like the kind of portrait experience you would like to have you can contact me.  I am John Mitchell, Storyteller. Artist. Photographer.  I can be reached by email here  or by phone at (519) 624-8460

Where Will Your Portrait Appear?

What do you know?

Does your business portrait brand you?