Out with the old, in with the new

Out with the old, in with the new, so the saying goes.

Death, taxes and change are the only certainties in life. These are two familiar sayings, or at least two that I am familiar with.

Both seem apropos in the Preston Towne Centre these days. Have you been there? 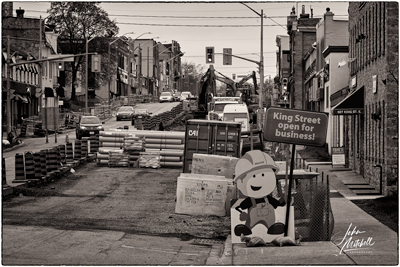 Over the summer they dug up King Street from where the Giant Tiger plaza is to approximately Waterloo Street. History has been dug up along with the road. Rotted railway ties from when the Grand Trunk Railway ran street cars down King Street discarded without a thought. And so it should be. They have no purpose.

Infrastructure upgrades; that’s why this is all being done. That and streetscaping. May as well freshen things up while we’re at it. WHY?

Will it make a difference? Of course it will. Will it make the difference that’s intended; that’s the real question. Will it save the Preston Towne Centre? Why do some downtowns thrive and others die a slow painful death? Will the revitalized freshened up core bring new business or will the construction kill old business? The best small-town downtowns in southern Ontario are listed as Elora, St. Mary’s, Stratford, Niagara on the Lake, and Paris Ontario. (Click these links for details: Best small towns & Five best) What do these downtowns have that Preston seems to be missing?

This week I went into the Cambridge Restaurant for breakfast one morning. I don’t think I have ever seen the restaurant this quiet. After a great breakfast I grabbed my camera and walked a small section of King Street.

As I walked along King Street I didn’t see a single soul other than the occasional construction worker. 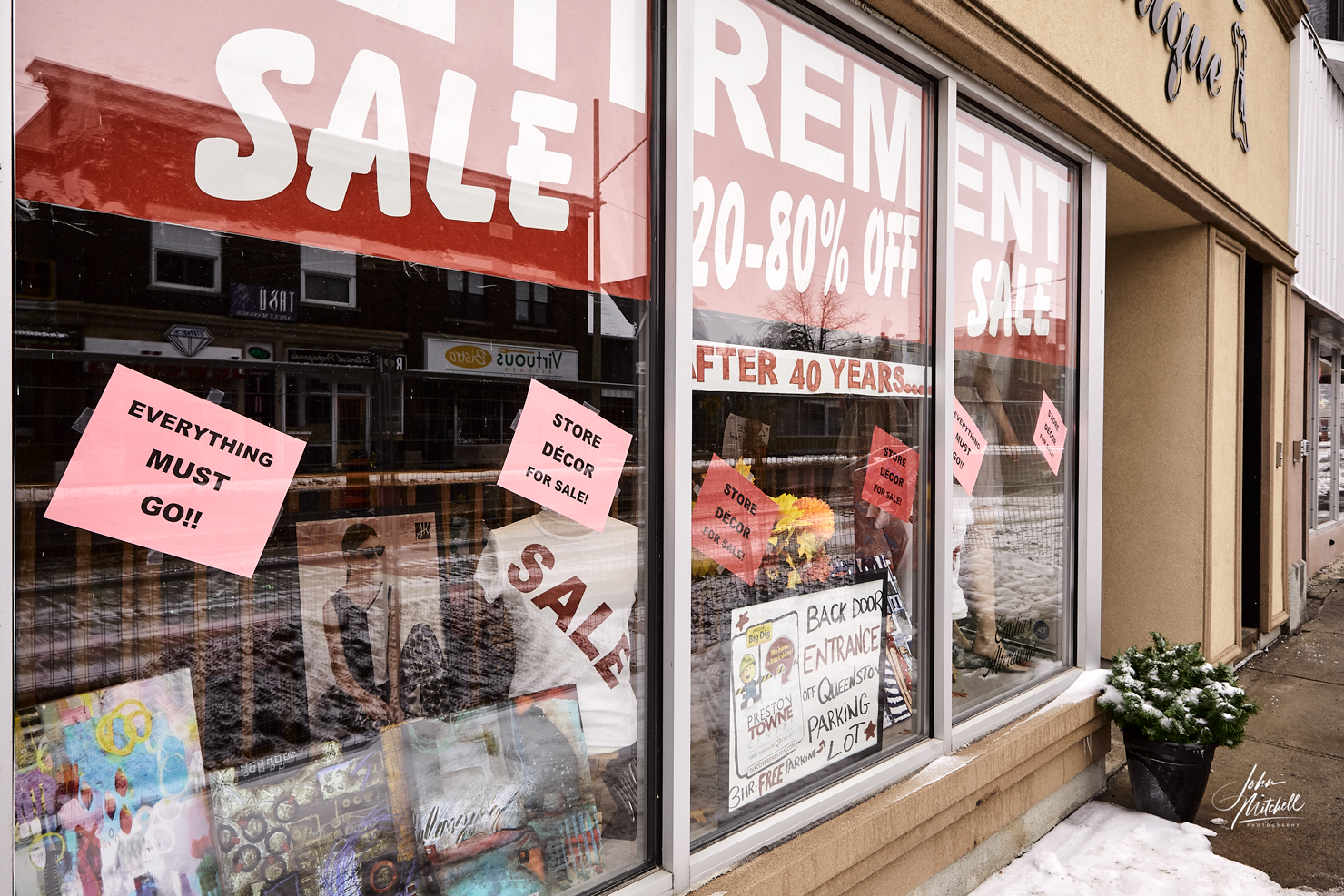 Emilia’s Boutique is closing at the end of the year, although it has nothing to do with the construction according to the article in the Cambridge Times 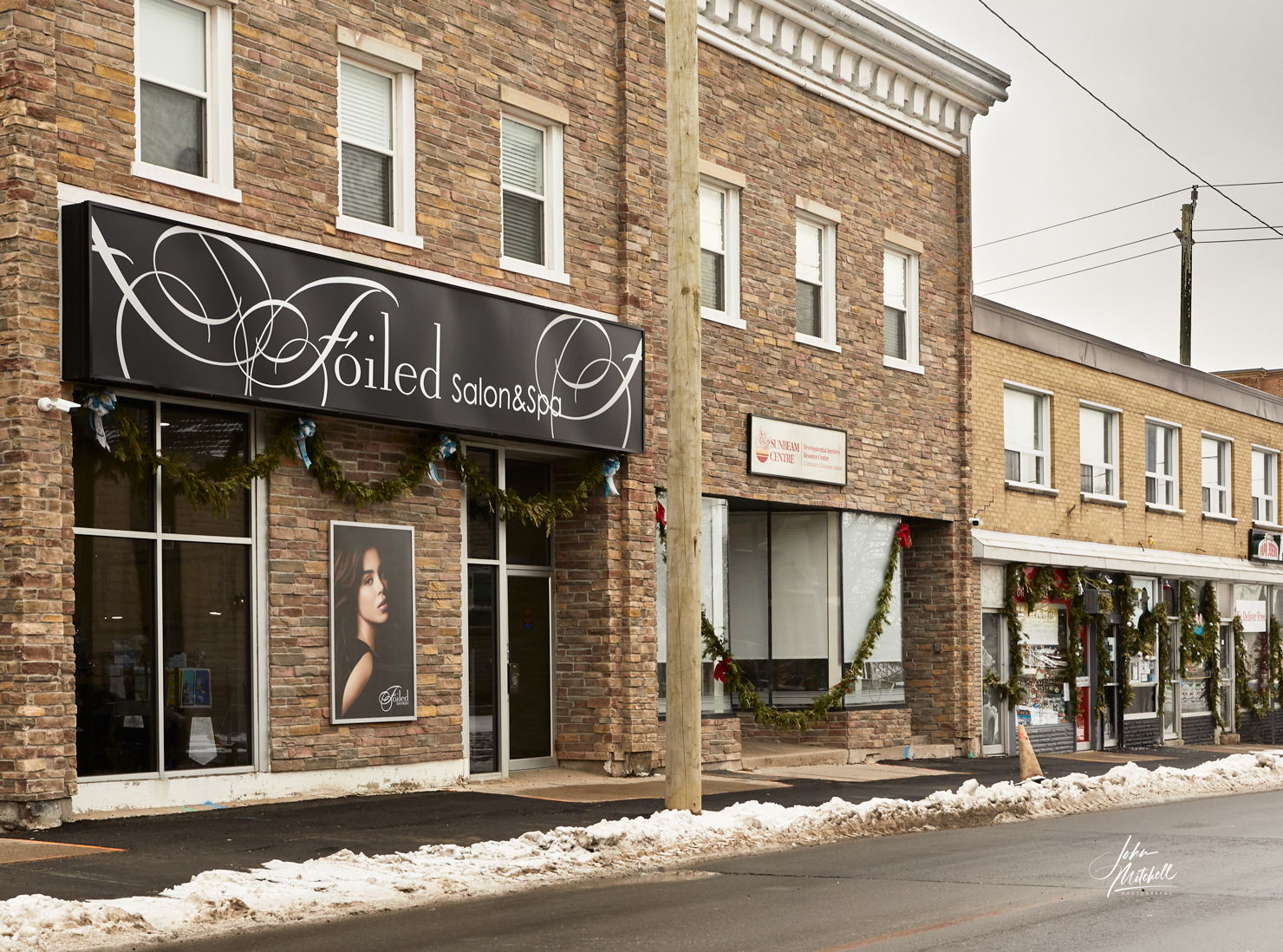 Across the road, where ScotiaBank used to be a new business is opening. Foiled Salon and Spa; have a look at their website

Why do some communities thrive?

There has been a lot of talk in recent years about the route of the proposed LRT. The BIA (business improvement association) for Preston is afraid the core won’t survive if there isn’t a stop in  uptown Preston. I look at Kitchener Waterloo and the construction and development along the LRT route and realize small business can’t afford the rent in these new super buildings which is why so many of them are filled with franchises. I think what is there is”just a mall with no roof.” Will the LRT drive Ma and Pa businesses out of our city?

So why do some cores thrive while others die. What do Paris, Elora, St. Mary’s, Niagara on the Lake and other successful cores have in common? I think the answer is in the WHY?  They have answers to the whys.

None of them have an LRT (light rail transit)

They are all destination locations.

They have thrived because they answered the whys.

The other thing these communities all have seems to be a unified view. In Niagara on the Lake I understand they are told what colours they can paint and what renovations they can make. Stratford is unified around the theatre and the Avon River. St. Mary’s is known for it’s old stone buildings. What could unify Preston?

Look at our neighbour; Galt. It has the old city hall, the old post office which is now a library and the old buildings of the gaslight district being refurbished and repurposed. How many times have the old buildings of Galt brought a movie or television crew to the city. In Preston the town hall, the old fire station, the post office, Daisy Heddon, Clare Brothers and many more all torn down or destroyed by fire.

Uptown will move to downtown

With the arrival of the LRT (if it ever comes) I believe you will find that uptown Preston will become downtown Preston as the main business area will move from King Street to Eagle Street. This move will only profit a few that will be involved in the development of the new core area. The people that want the LRT and are involved in the real estate and development deals that go with it are the ones that will make the real killing with the Light Rail Transit.

So can uptown Preston survive? Only if they can find the leadership that can put together a unified marketing plan that will make it a destination location, and only if they have the support of the people of Preston.