Yes,  I have empathy,believe it or not. It’s because of attending a seminar of Leon Kennamer that I have it.

The year was 1982. A flyer at Sylvano Color Labs in Toronto informed me the Toronto camera club was presenting an all day seminar featuring Monte Zucker, Al Gilbert, and Leon Kennamer. That day changed my life forever.

I’d heard of Al Gilbert – knew nothing of the other two, but I registered and went.  My first professional seminar.

Table displays of a number of suppliers and trade organizations were set up around the room. Among them was a group I had never heard of: The Professional Photographers of Canada. In those days they were a real “professional” organization, not just a glorified camera club. You had to be a “full time practicing photographer” to qualify for membership. I qualified. The beginning of the big change.

Each speaker that day had a profound impact on my career and life. Each is a story in itself. Today I’m going to stick to what I learned from Leon Kennamer.

Leon was a portrait photographer from the south eastern United States where it’s sunny a good portion of the year, a problem many of us in Ontario would love to have. Mr. Kennamer had developed a unique style of lighting because of his situation. As photographers we usually add light to our subjects in order to create mood and atmosphere. In Leon’s situation the light was already there so he developed a way of subtracting the unwanted light – “subtractive lighting.” He was there to teach us all “subtractive lighting,” a system I still use today.

The room was packed with close to 300 photographers, and the biggest lesson I learned from Leon Kennamer had nothing to do with subtractive lighting. Leon asked “How many of you have had your own portrait done?” There were probably only 30 hands went up. Less than 10%. I was one of the other 90%.

Kennamer followed up saying “I don’t mean you were at the beach with your photography friends and you said while we’re here I’ll photograph your family and you can do mine. I mean how many of you have hired your mentor to create your portrait?” Three hands! That’s all that were left up.

“How can you sell something you obviously don’t believe in yourselves and how do you know what it feels like to be on the other end of that camera?”

Those were the next words out of Leon Kennamer’s mouth and I have never forgotten them.

It was shortly after getting my membership in the Professional Photographers of Canada (PPOC) that I met David James Entwistle of Waterloo. (That’s a story for another time.) David (DJ) went on to become my mentor and good friend for many years. Having never forgot Kennamer’s words, one day I asked DJ if he would create a portrait of me, and that’s when I got empathy.

I’ve been there. I did that. I know how you feel. 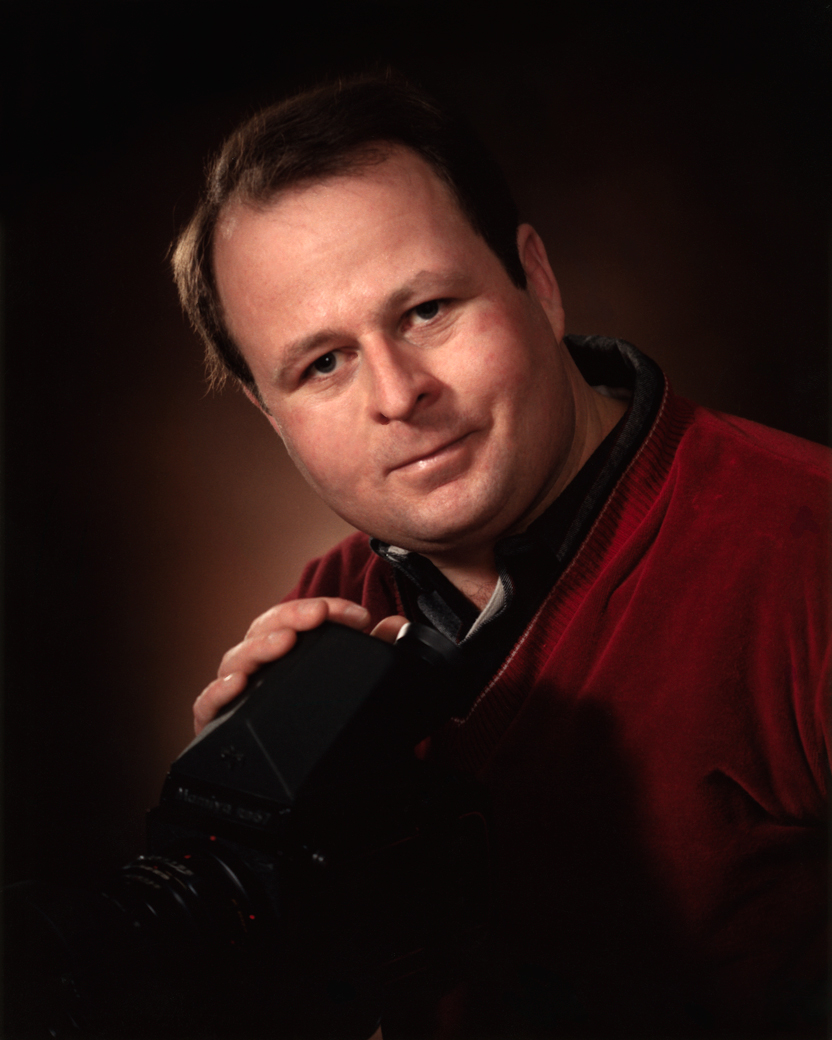 Portrait of me created by David James Photography, early 1980’s

The day of the session I arrived in DJ’s studio with a small bag containing about 6 changes of clothing.  He went through what I had brought, handed be a velvety top and said “You know where the washroom is, go put this on.”

It’s called a sitting because in most cases that is what you end up doing; sitting. I sat.

Knowing I was a photographer putting a camera in the picture was a must. Not just in the picture but a good 12 inches in front of me. This came with the instructions “put your head beside the camera but don’t get off the stool.”  I leaned. I was chubby and this caused most, if not all of that “chub” to disappear underneath me.

The next few minutes were spent arranging my hands, trying a couple different positions until the desired effect was achieved.

I stayed – sort of.  Lights got turned on and off. When DJ was adjusting a light behind me I turned to see what he was doing, only to be scolded “I can’t adjust the lights if you’re not facing the camera.” I wanted to watch and learn from what he was doing.

The lesson I got took me years to realize: “I get the results I get because of the way I do it and if you want the results I get you will let me do it the way that works, not the way that might be convenient for you.” If you want the beautiful light that comes with a portrait created at 6 a.m. you get up a 4:30 and get ready for 6. You don’t show up at 10 or noon and then wonder why your portrait isn’t as nice as the one you saw in the window.

Lights set and pose arranged it was time for making the exposures. This was one of the most stressful experiences I have had. My back was very sore from leaning over at this point. As I am given directions to raise the eyes 6 inches, turn the head this way, tilt the head that way I am stressing over “does my smile look alright, is it too big, does it look phony?” I’m wondering if I am pushing my chin out far enough to get rid of the double chins.”

I know how you feel. All those thoughts were going through my mind one after another the whole time I was being photographed.

When I went back for the viewing and to select my portrait I got the next valuable lesson: photographers don’t think like regular people.

During a creation or “sitting” My concentration is on the pose and the light. Does this pose bring out the subjects best features and minimize any imperfections we all have? Does the lighting draw the attention to the desired area of the face.

The lesson I learned; when you’re the subject, none of this matters. When I looked at my proofs I wondered where my hair had gone and why my nose was so big. I looked at my double chin not the short side loop light.

Knowing what it’s like to be on the “wrong” side of the camera made me a better photographer because I know what is important to you the subject.