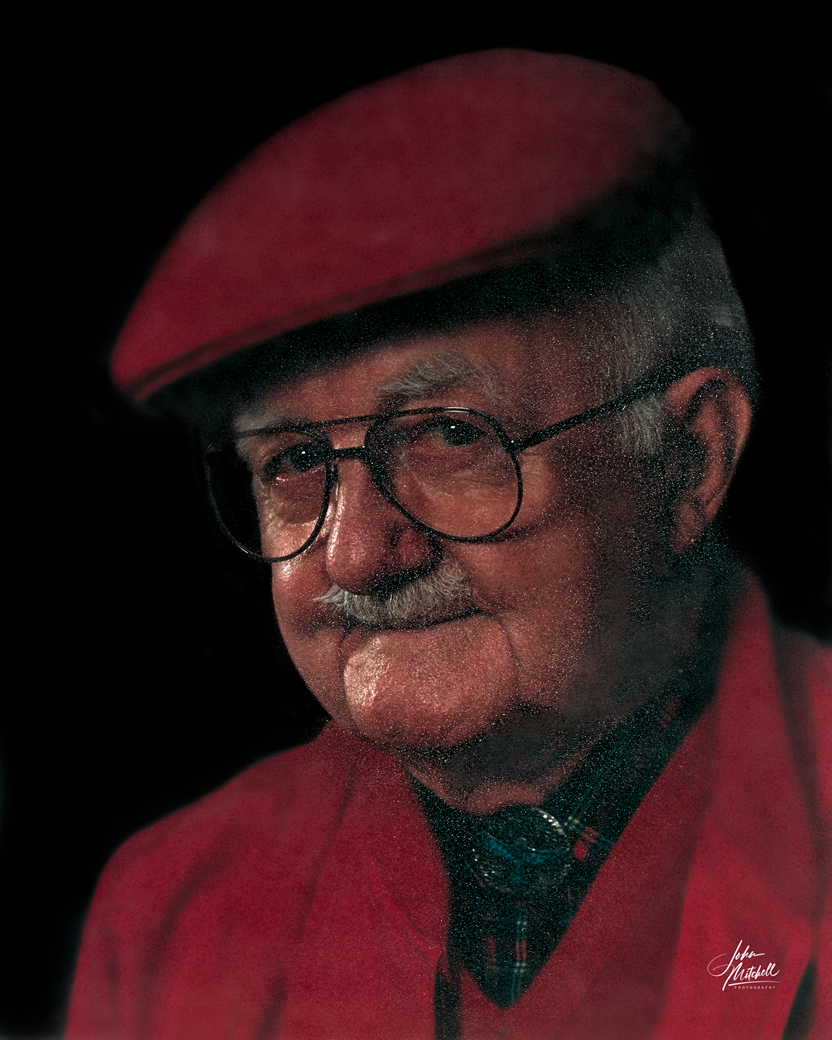 Success is not accidentally arriving at a place that makes you happy.

In the early 90’s I saw him walking King Street on a regular basis. In those days I had a store front studio on King Street. Whether he was out for a stroll or on a mission I did not know. What I did know, was he seemed to always be dressed very smartly.

I wonder if I noticed him more in the spring and fall? He always stood out then. I didn’t know it at the time, his name was Alf. When Alf wore a windbreaker he always had a peak cap that was the identical colour to his jacket. Olive green jacket meant an olive green peak cap and his red jacket had a matching red cap.

That’s a face I want to photograph.

Every time I saw him I thought “that’s a face I’d love to photograph.” It had character.

One day the front door opened and there stood Alf. “It’s our 50th wedding anniversary coming up.” he said. “How much do you charge for a sitting. We’re going to need a couple 8×10’s for the children and maybe one for us. Our’s might be a little bigger.”

He introduced himself and I got some basic information from him. In a very polite way he steered the conversation back to his original question; “how much.” I told him the price of the portrait prints, the 8×10’s and the 11×14 and told him I had a deal for him. “I won’t charge you for the sitting if you agree to sit for a portrait for me of just you. I have the rights to it and can use it as a sample of my work.”

“You have a face I have always wanted to photograph.” I said. And with that a deal was struck.

In a follow up meeting we discussed what he and his wife should wear for their anniversary portrait, the style of portrait they were looking for, etc. I told him for the portrait of just him I didn’t care what he wore for a shirt but I wanted him in his red jacket and cap.

I no longer have the negative to that portrait so this is a copy from an 8×10 I still have. The print has a textured laminate on it which makes getting a good scan near impossible.

I got the look I was after: the square jaw, the jowels, and the twinkle in the eye. I had a test print made and sent it back with instructions for the lab to print it deeper and richer. That happened a couple times before I finally saw the portrait that was in my mind. The negative and the sample print then went to the lab with instructions to make a 24 by 30 inch portrait to match the sample provided. Laminating and canvas mounting finish the look.

Craftsmen perform their duties with quality

In the days of film canvas mounted prints were made printing the image on quality photographic paper. The finished print was then laminated and mounted to a piece of hard board. The experts at the lab would then carefully separate a corner of the laminate and emulsion of the print from the paper backing. Carefully they would roll the print and the emulsion, held together by the laminate, separating it from the paper which would remain attached to the board. I remember the salesman from the lab telling me 2 out of every 5 prints would be were destroyed in the process.

The stripped image would then be laid out on a piece of artists canvas and with a heavy duty press the image was pressed into the canvas. The canvas replaced the paper that had been stripped away. The enormous pressure of the press would allow the texture of the canvas to come through and give character to the surface of the portrait.

In my opinion the gicléé prints that are done on canvas today don’t come close to the quality of canvas mounted prints from the days of film. (There are a few labs that will make a canvas portrait the “old fashioned” way.)

The finished framed portrait hung on the wall in my reception room for years. I entered the image is competition but it didn’t fair well with the judges that year. A few years later I had my love of the portrait verified when I was doing a wedding. The groom had told his daughter about this portrait. She, being an amateur photographer was interested in seeing it. The groom was Art, and he told me about his daughter and an interest in photography. She lived in San Francisco and was coming home for the wedding. Art told me his daughter had the pleasure of meeting Yousuf Karsh on more than one occassion. Apparently she was in Ottawa and walked in to Karsh’s studio and non-challantly said “is Mr. Karsh in?” At that moment he walked into his reception and agreed to “give her an audience”. They connected and whenever she was back in Ottawa she would call the studio and thus had  the priveledge of meeting Mr. Karsh on more occassions. I WAS JEALOUS!

The day of the wedding the young lady walked into my reception and the first words out of her mouth “Mr. Karsh would love that.” I no longer cared what the judges thought of it.

“Mr. McGlynn” is one of my most successful portraits. Successful because there was a preconceived vision of the finished image before a camera was picked up or a light was set. Mr. McGlynn’s portrait fulfilled my vision and met my expectation. Success!

Making up for lost time