The views expressed here are my own and only mine. They are not the views of any group or organization and should not be taken as such.

Saturday, July 24th, 2021, a group of approximately 100 concerned citizens met to express their objection to the city of Cambridge Ontario’s intention to open a safe injection site within the city.

It seems the city of Cambridge has made a few attempts to muddy the issues, trying to confuse taxpayers with name changes to these illicit drug stores. The latest terminology is CTS (Consumption and Treatment Services). It doesn’t matter what name you give it, it’s a place where people are using mind-altering drugs that are injected into their bodies with needles.

NOT IN MY BACKYARD

Were these 100 citizens just complaining because they don’t want this site in their backyard? NOT AT ALL. Most of them don’t want a site anywhere in Cambridge. I am one of those people.

YOU CAN NOT IMPROVE QUALITY OF LIFE BY LOWERING THE STANDARDS

Before  I get into the objections, I think it is important that I clarify that the city of Cambridge has put forward two suggested locations for the site. One is at the plaza at 8 Oxford Street and the other is at 15 Easton Street. They are currently seeking public input on the locations. You can take the survey here or participate in a “kitchen table” discussion and submit the results to city hall. The documents for the “kitchen table” discussion can be found on the same page as the survey.

What they don’t tell you is it is PERFECTLY ALRIGHT TO SAY NO TO BOTH LOCATIONS.

WHAT ARE THE OBJECTIONS:

Why do people feel that way? Existing problems around the homeless shelter known as ”The Bridges.”  The history around what has happened near other existing injection sites supports these concerns.

There was a small group of counter-protesters present, grabbing media attention. As some pointed out, they never organize their own rally, only show up to disturb others. It would be interesting to know where they live or even more where they work. How many of them are employed in distributing these illegal drugs and the social care necessary because of the impact of these mind-altering chemicals on the users. 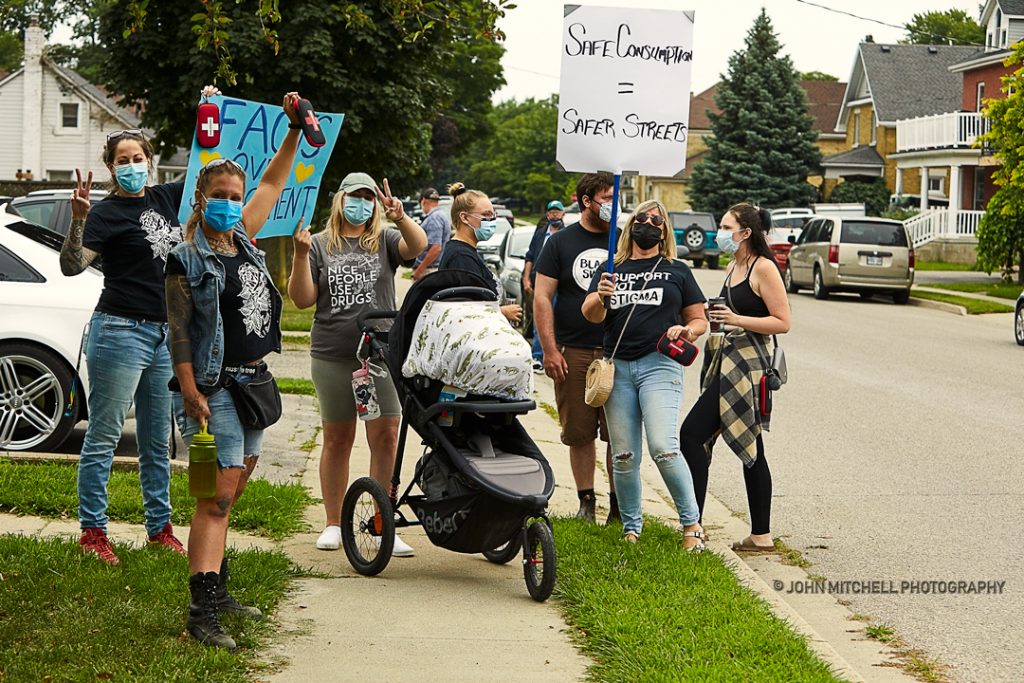 Personally, I believe the problem is a generation raised to believe they can do whatever they set their mind to. They didn’t keep score in baseball games because losers might not be able to deal with losing. They were never held back in school when they didn’t do the work because failing might damage their ego. Now we have an entire generation that can’t deal with things not going their way. So when you can’t deal with the reality you look for a different realm – a drug-induced stupor.

Instead of spending money on safe injection sites let’s invest in teaching the next generation how to deal with life and reality. Let’s teach them how to handle money, how to learn from their mistakes, and how to make changes for better results when things don’t work out the way they wanted.

THE BLEEDING HEARTS ARE GOING TO CRY.

There are some that are going to say “you haven’t lost a loved one.”  No I haven’t. But to those that have lost someone to an overdose, I would say ‘where did they overdose?” Statistics show that many of the overdoses don’t happen on the streets, but behind closed doors in private residences. For those that blame society or the lack of injection sites for their loss I say “stop looking for someone else to blame.” Where were you when they were alive? What were you doing to get them help? Did they even want help?

YOU CAN’T MAKE A COMMUNITY SAFER OR BETTER BY LOWERING THE STANDARDS. SAY NO TO CTS ANYWHERE IN CAMBRIDGE. TAKE THE SURVEY AND WRITE TO THE COUNCIL. MAKE CAMBRIDGE A BETTER PLACE FOR EVERYONE, NOT JUST DRUG USERS.