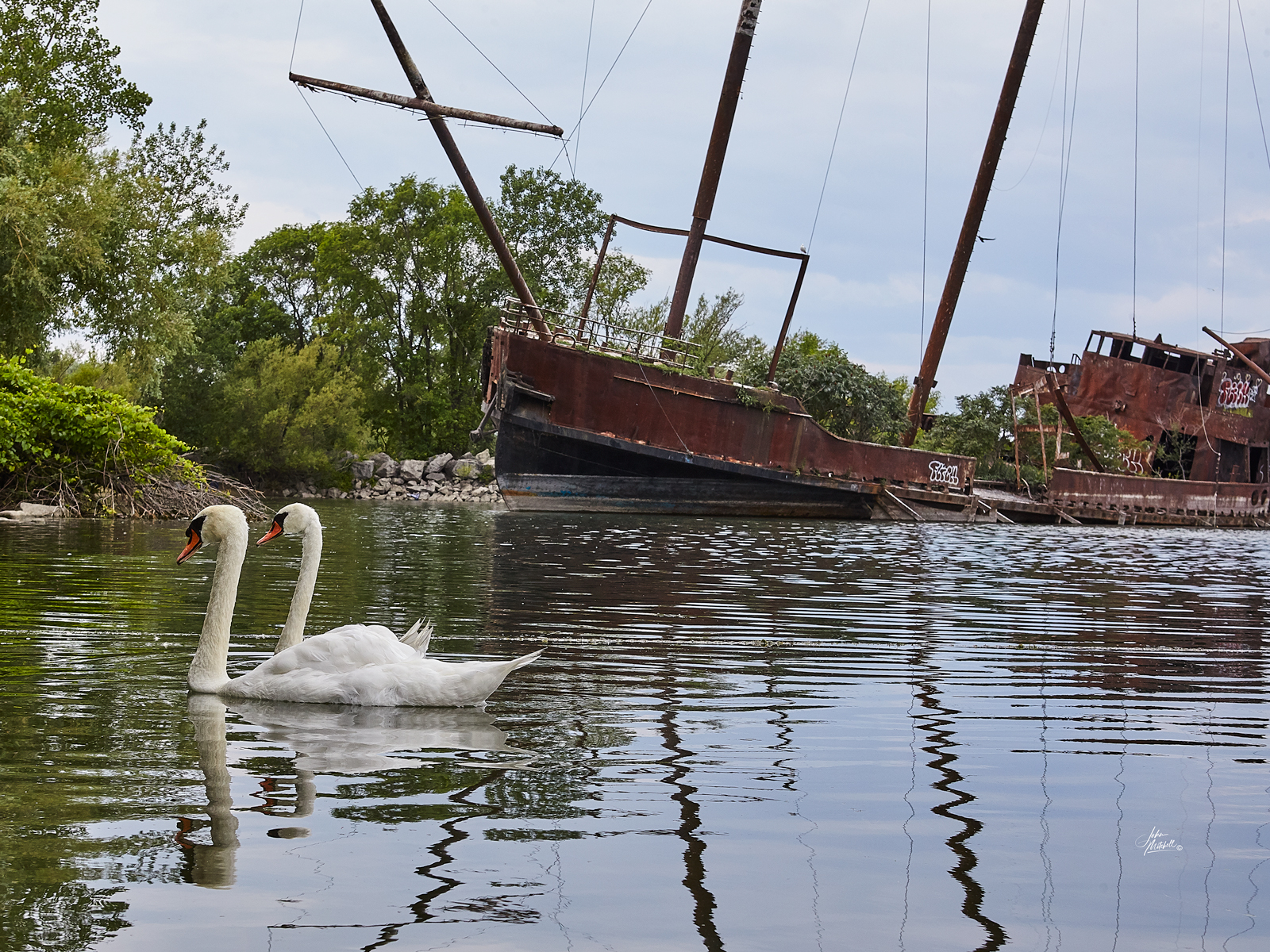 Can you make up for lost time?

Is it better late than never?

July 22nd my friend Reid and I ventured down the highway to a little place called Jordan Harbour.  I have driven by it many times and thought “that looks like a nice place to canoe.”  Now in my senior years, I decided to venture out onto these inlet waters of Lake Ontario.

Jordan Harbour Conservation Area was a little tricky to locate but as it turns out, well worth the effort.

Upon our arrival, someone was working on a dock.  It turns out they were building a brand new dock, and the fellow working on it told Reid it would be ready upon our return.

Jordan Harbour is where Twenty Mile Creek meets Lake Ontario. Putting our kayaks in the water we headed upstream. I heard tell there was a railway bridge there. Sure enough, not long in the water, the line of a bridge crossing the water could be seen on the horizon. 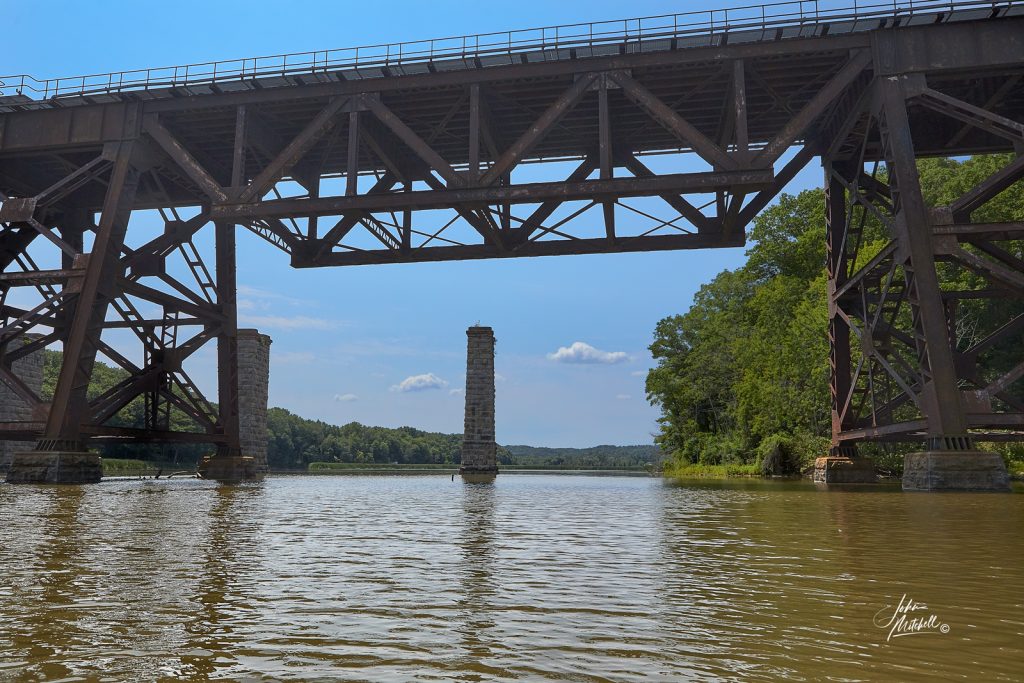 Jordan Station railway bridge and the remnants of a previous passage over Twenty Mile Creek. I don’t know if this bridge is still in use and I had no intention of sticking around to see if a train came to cross over it.

Being on the water and under the bridge gives a whole new perspective to these structures and many interesting angles and views are there for the discovery. 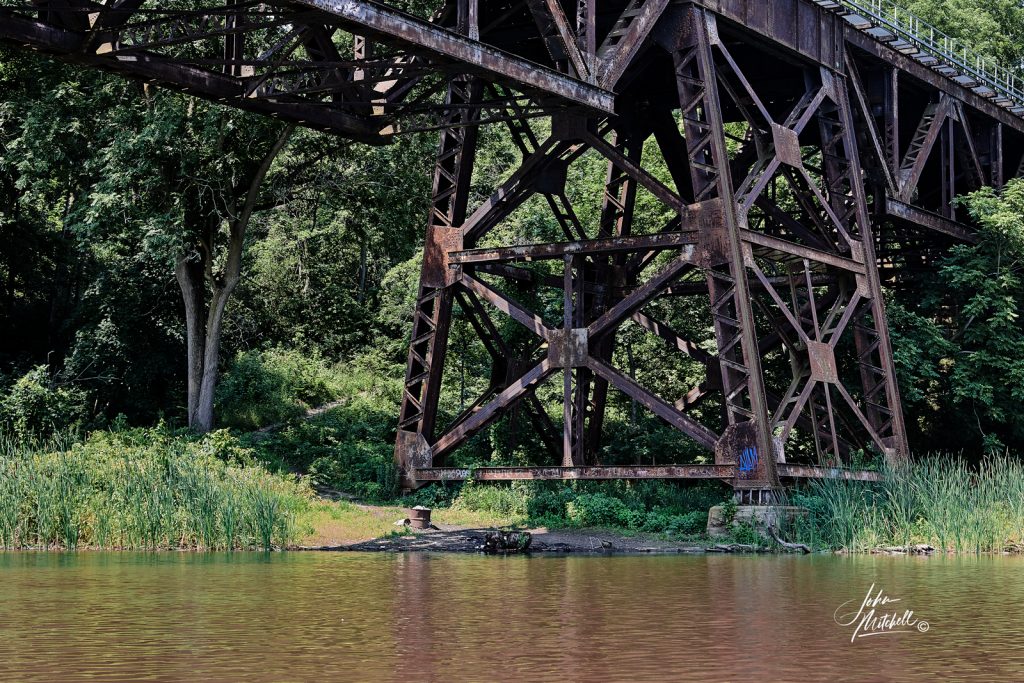 When I purchased my “banana boat” earlier this year from Paluski Boats my thinking was to get something that could be easily seen in the water, particularly if it was upside down and I was bobbing up and down next to it. Well, it must work, because even the wildlife can see it coming. And, it must scare the hell out of them because even the turtles were diving for cover as I approached. I need to work on sneaking up on them.

Our stomachs told us it was getting to be time to head back to our starting point to have lunch. 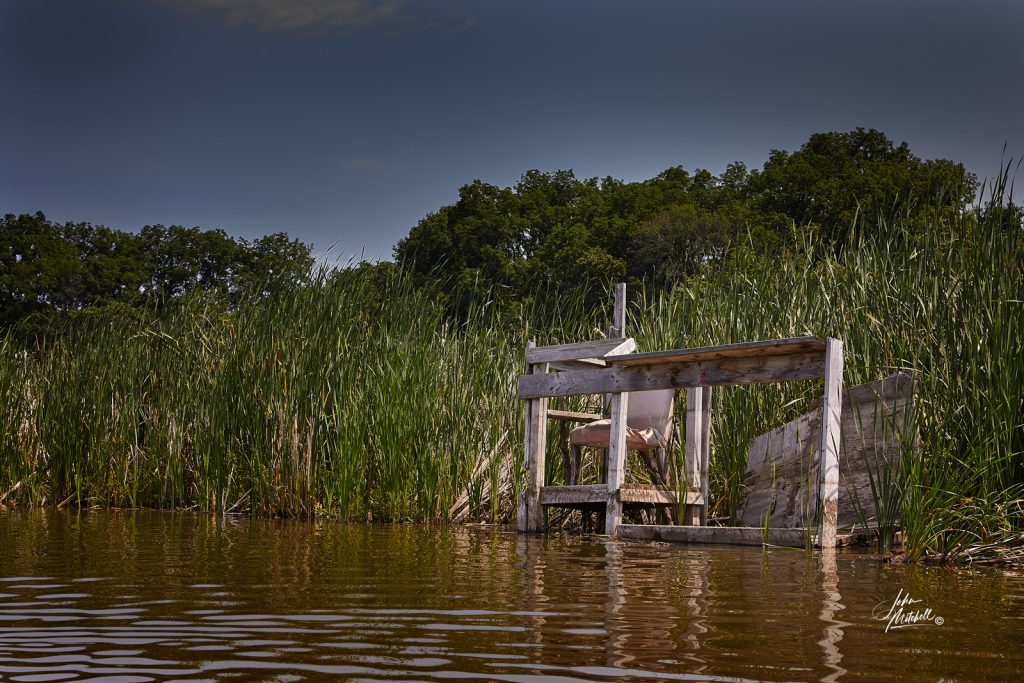 I don’t know if this was for hunting or fishing, and I have no idea what the access would be like from the land. Regardless, it has some interesting character. 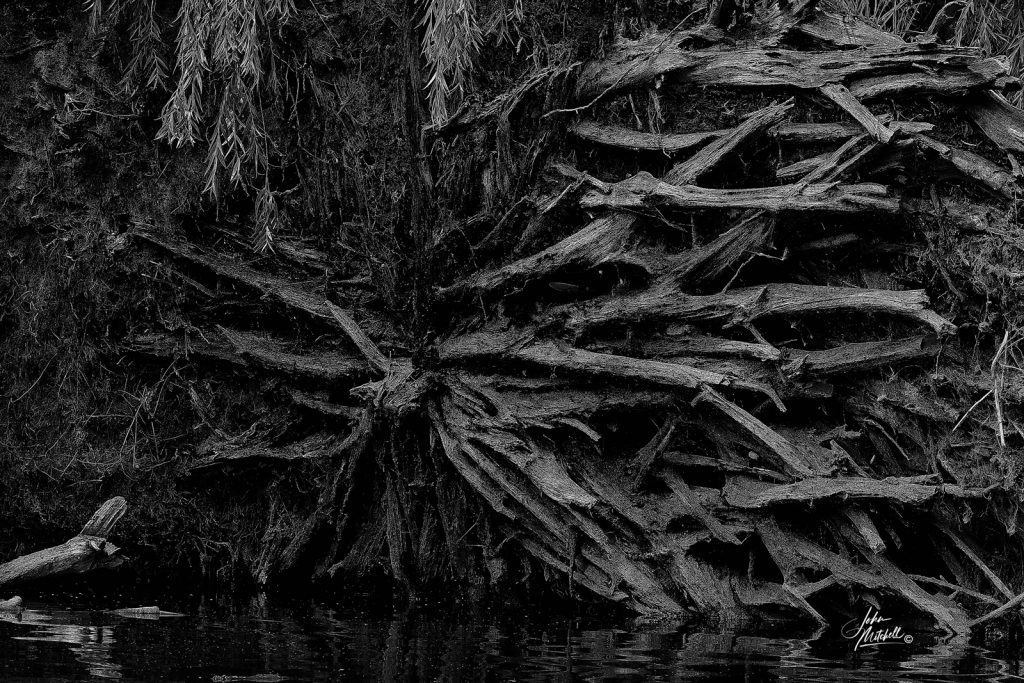 Here I was able to enjoy the patterns and designs of mother nature that are only available to see from the water. 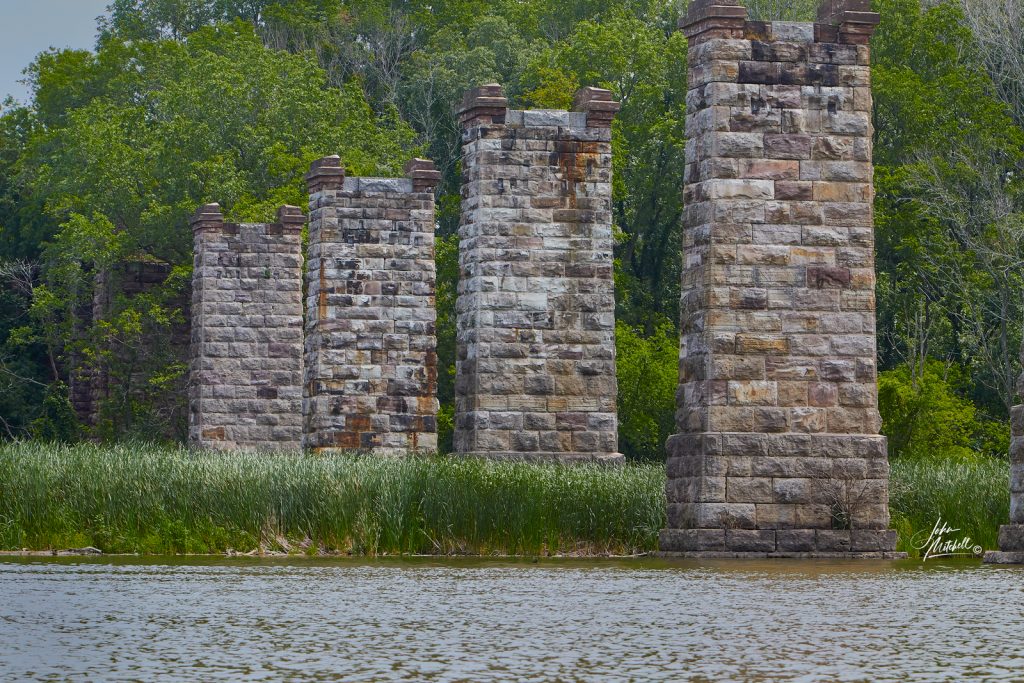 The trip back provided another opportunity to enjoy the view of the railway bridge and to photograph the remaining pillars from the previous structure.

When we got back to the starting point the new dock was completed, just as promised. Not only was it a new dock, but it is also specifically built for launching and docking kayaks. Did that ever make getting in and out of the kayak easier.

After stretching our legs and having a bite to eat we re-launched and paddled out under the QEW (Queen Elizabeth Way) and along the shore of Lake Ontario into the harbour where the remnants of a sailing ship have been rusting away for years. You can see a portion of this ship when passing the area on the QEW, but this gave us a whole new view. 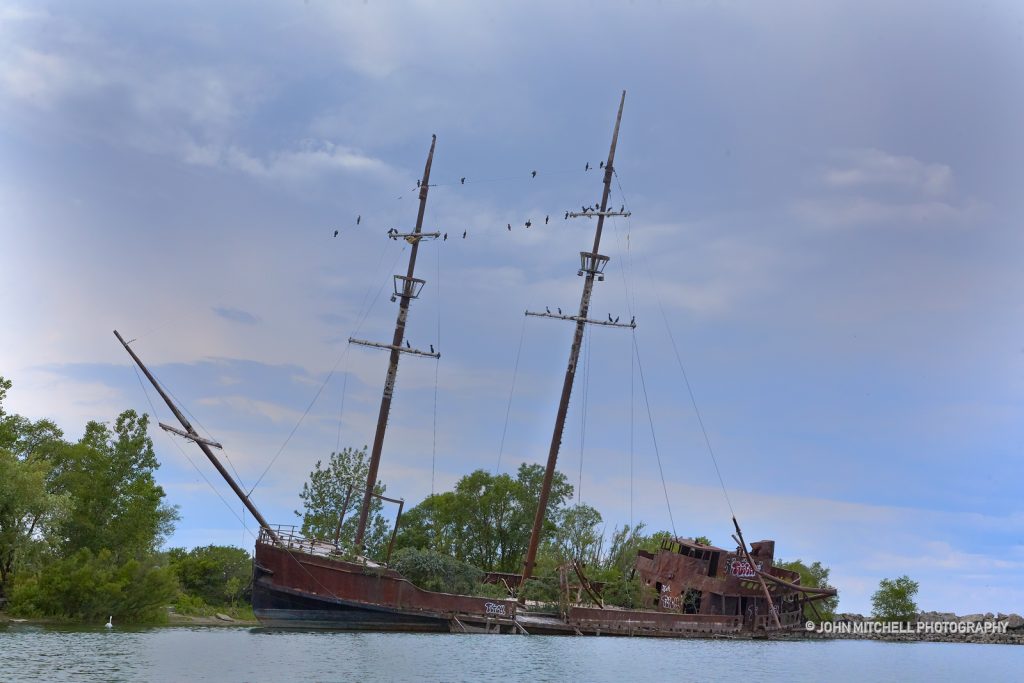 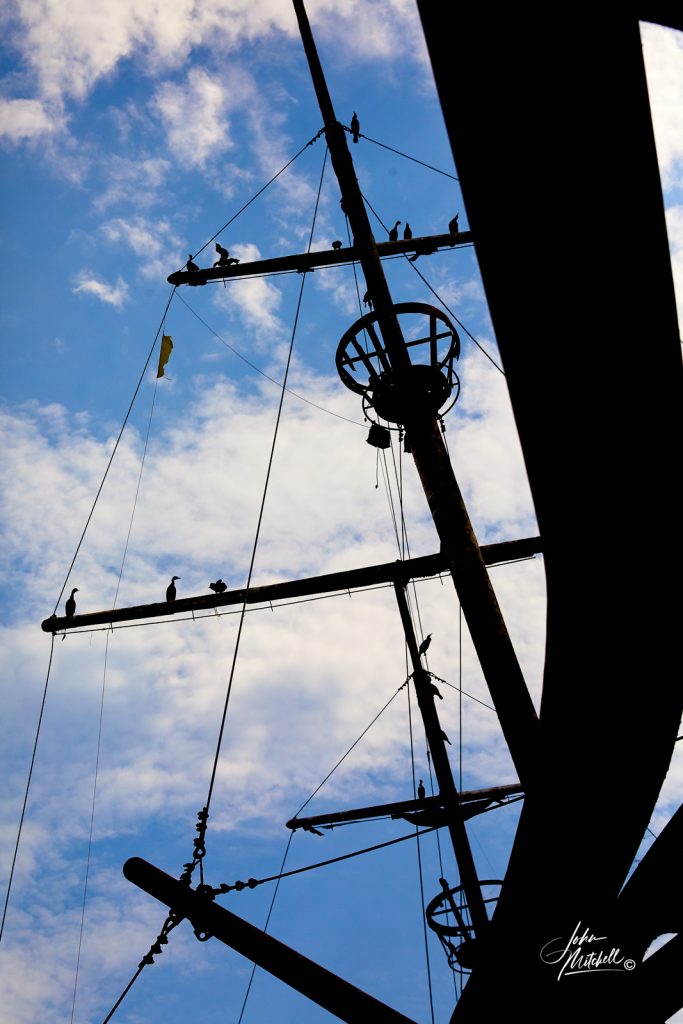 When I saw some swans swimming nearby I knew I had to try and get a shot of them in the foreground with the wreck in the background. It took some maneuvering to coach the birds into place without disturbing or upsetting them too much, but oh, it was so worthwhile. 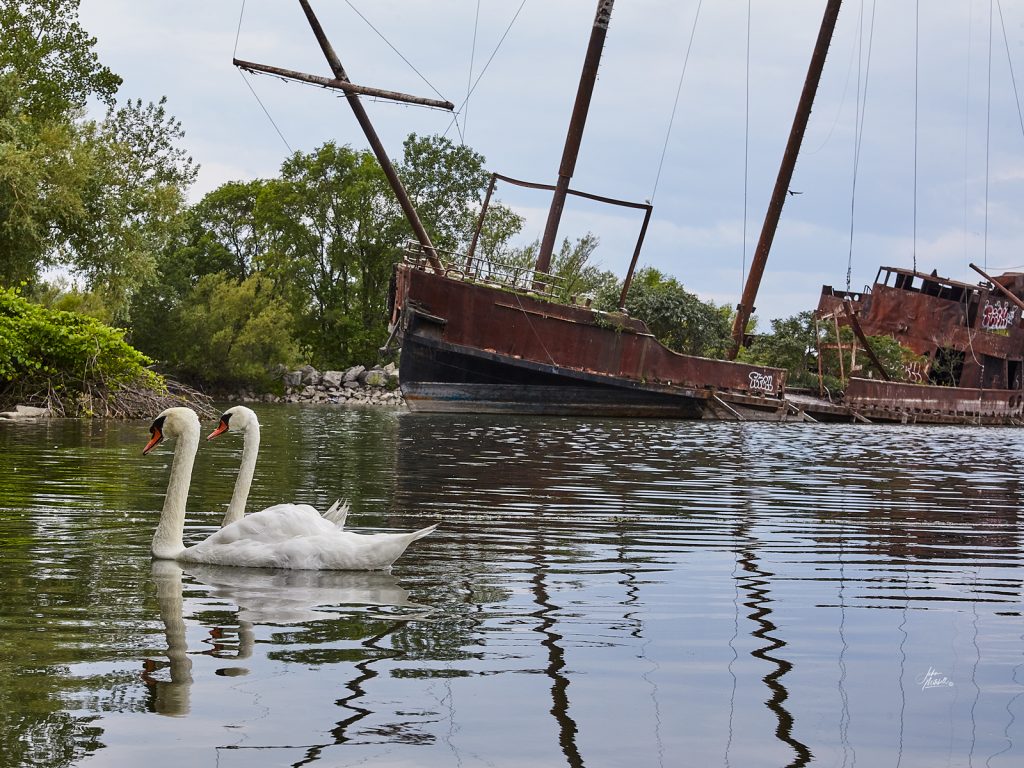 Jordan Harbour is definitely a decent paddle and I’ll be back. I want to go a little further up Twenty Mile Creek. Next time.