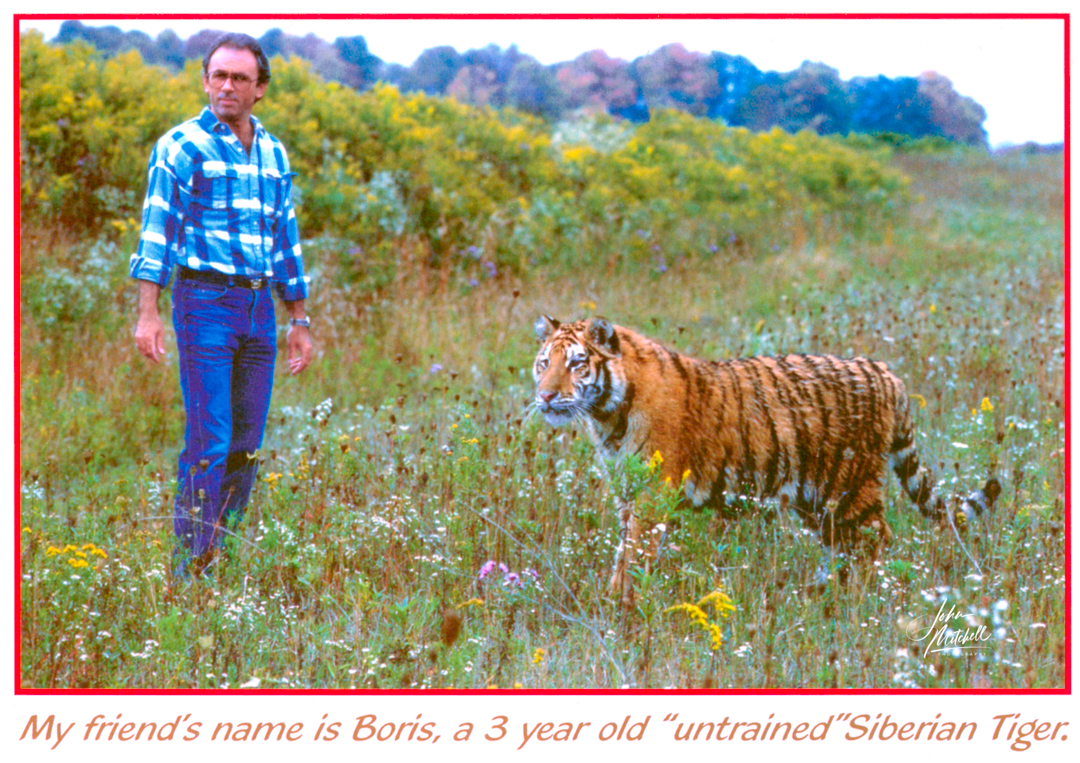 It was in the late 1980’s. I was taking on pretty much any photographic assignment I could find in order to pay the bills. I picked up the phone when it rang to hear the voice of Rick St. Clair of Concept Four. I had done some work for Rick in the past and he had another assignment for me.

His client was a company called Wild Kingdom. They took exotic animals around to different malls to put on display. You could get your picture taken with one of their baby animals. Rick was working on a new brochure for their marketing and needed some photography for the display. I was told they were based just outside of Cambridge and if I met Rick at his office he would drive us out.

The day of the shoot I met Rick at his office, loaded my Hasselblad and some other gear into his car and away we went. On the way Rick told me they had a Siberian Tiger name Boris that he wanted a picture of. I was asking questions about how they were going to use the images and trying to get a feel for what they needed. The job was going to require transparency film so they could get the best possible colour in the brochures.

When we arrived on site Rick went to let his client know we had arrived. He returned a few minutes later saying the owner would be right out. Rick said Boris was in his cage behind the garage and we could have a look. The cage was a cement pad and chain link fence. On the other side of the chain link was Boris. This certainly wasn’t a small cage, but Boris made it look awful small.

Before I even fully comprehend what is happening the owner comes out, unlocks the cage and takes the Siberian Tiger out. YIKES!

We do this all the time he says.

As we walk to the back 40 I notice it looks a lot like what you see in the films of Africa: tall wispy grasses blowing in the gentle breeze, a two track path that looks like it was made for off-road jeeps, gullies and moguls. I put the 150 mm telephoto lens on the Hasselblad. (I’m not getting any closer to this tiger than I have to.) Boris saunters on ahead of us, into the long grass of the gully, up onto the mogul, back into the gully. Every once in a while he looks back to make sure we are still coming. It’s like taking your dog for a walk except it’s one freaking big cat.

This is Boris and Rick.

Keep in mind Rick is at least 6 foot 2 inches tall and I measure a whopping 5 feet 6 inches in stature. Boris came well above my waist when he was on all fours.

I’m shooting away and soon reloading film. These are going to be great images. It looks so real – like being in Africa (not that I have ever been in Africa).

Boris goes down into the gully and up onto the mogul on the otherside. From the trail I am now looking up at this Siberian Tiger above me and probably 4 – 5 yards away from me. With the the 150 mm lens on the Hasselblad I am focused on the head of this Siberian Tiger. As I’m looking through the lens the thought goes through my mind that this looks just like the pictures you see in the National Geographic films of the big cat just before they attack their prey.

In panic I pressed the button of the shutter just as he jumped. I felt this huge right paw go behind my right leg and pull my knee into the mouth of Boris. I heard the owner scream BORIS. I remember him taking his walking stick, swinging it rapidly and coming down hard on the top of the head of the tiger. Boris let go of my knee, shook his head several times and strolled away. He was playing and I was the play thing of one large Siberian Tiger.

Rick wanted to know if I wanted to go home and change my underwear. The whole thing happened so quick I didn’t have time to ever be scared.

We continued our walk and headed back to the cage. Along the way Rick asked if I could get some pictures of him with Boris. That’s when the two images in this blog post were created.

When the film came back there were indeed some amazing shots of Boris walking through the wild grasses just outside Cambridge Ontario. There was also one very out of focus image of a big head in motion.

The transparencies were turned over to Rick of Concept Four and I have know idea where they are now, but years later I Rick gave me a copy of the advertising piece he had put together for his business. The one featuring Rick and Boris.

Are you afraid of cameras?