A week with David Ziser

I have been a professional photographer since 1971. I have done this full time since 1985. But, I can’t remember a time when photography was not an important part of my life.

I believe I have always considered the subjects of my portraits to be great and important people. Any other thought wouldn’t allow me to bring out the best in my subjects.

Throughout those 47 years I have had the incredible privilege to study under and be mentored by some of the world’s greatest master photographers.

In that time I have collected an incredible amount of memories, notes, and memorabilia. Recently I realized that it was time to purge some of these things as they will mean little or nothing to anyone other than me.

In the process of doing that I came across notes from a remarkable week I spent with David Ziser in 1989. At that time the Professional Photographers of Ontario partnered with Sheridan College in Oakville and hosted some of the leading photographers of the time. You chose the photographer you wanted to study under and spent an intensive week with that master.  The school ran two weeks and I chose to attend both weeks. The first, I was tutored by David Ziser and the second by Jay Stock.

As I went through some other keepsakes I came across the certificate that was issued upon completion of my week with Mr. Ziser. 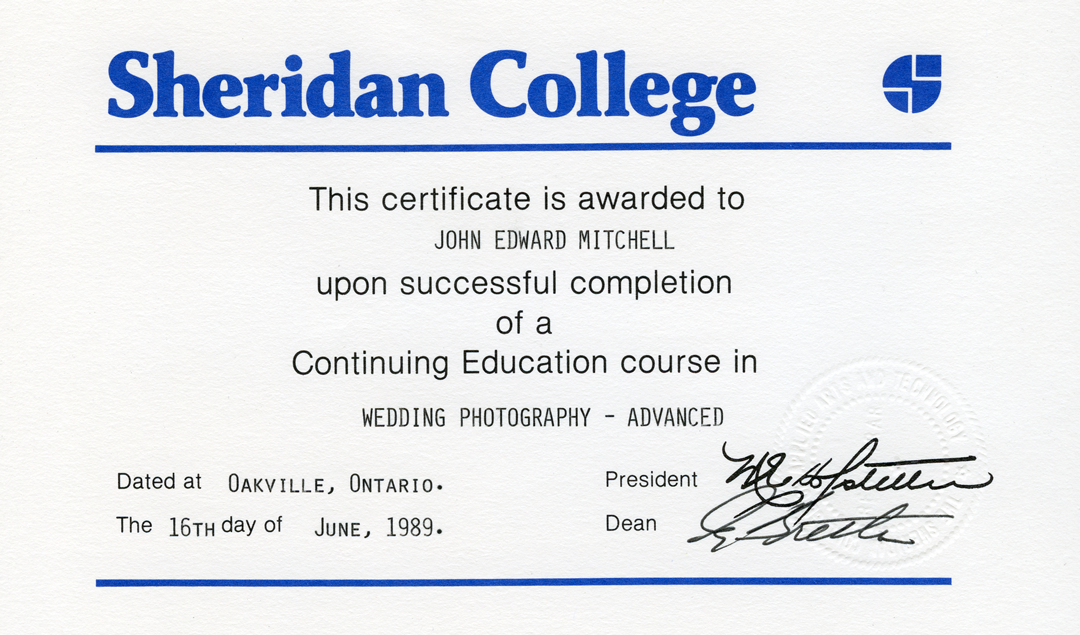 David Ziser was, and I believe still is, a meticulous perfectionist. He is a genius at using the surroundings to tell the story, bringing lines, textures, and colours into careful play to emphasize the subject. He taught me to see the subject relative to the background, foreground and middle ground.

There was much more to David than lines and composition. He was technically as meticulous as he was artistically, From David I learned to blend artificial lighting with the ambient light of the scene. Through expert use of the controls of the camera he was able to adjust the shutter speed or aperture to control the affect and impact of the setting on the subject.

Mr. Ziser is still a practising professional photographer and you can see examples of his work on his website http://ziser.com/

Thanks David for sharing your love and knowledge of photography.

John Mitchell captures his subjects at their emotional high point. It’s part art and part science. His technical mastery is unrivalled. The heart and passion John pours into his photography knows no bounds.